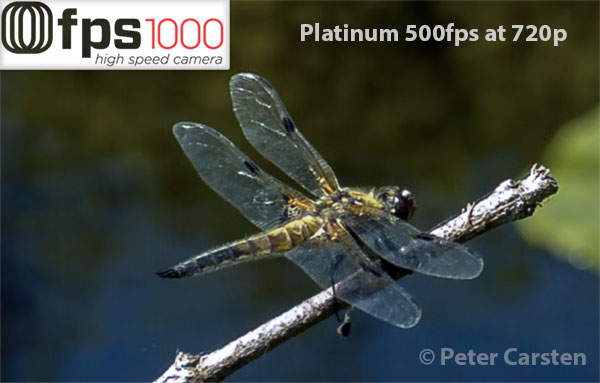 The fps1000 Platinum camera capable of 500fps at 720p resolution has started arriving at the doorstep of Kickstarter backers this week. Production is continuing to fill the backlog of orders and should proceed later on with other models like the fps1000 4k which we are expecting.

One of the first people to get the camera is Peter Carsten an early backer and he has started to post some footage tests of birds in flight with the camera. Peter was kind enough to share his footage and even a sample frame for us to test in our RAW DNG Converter.

The way the fps1000 works  is by recording RAW image data to flash memory and then saving it to a file format. In this case it is DNG which is an open RAW format from Adobe Labs.  By using DNG the files are widely compatible with all RAW converters that can handle DNG which means easy tweaking in just about any application from Adobe Light Room, Apple Aperture or DXO just to give a few examples.

Peter has posted a few samples at his Youtube channel here! We highly recommend that you Subscribe in order to keep up with his camera samples and testing. The samples are shot with the included lens  which is a 35 mm C mount lens and or with a Canon 24 to 70 mm at the 70mm end according to Peter. Probably using a C Mount to EF adapter we believe.

We show two of the samples here which show the 500fps camera in action. You can see the rest here if needed.

Birds on feeder including a woodpecker:

Dragonfly taking off and landing:

In the Sample below you will see that the image straight from the DNG file has a greenish tint. We color corrected as best as we could to bring out more natural color.  The camera can only improve from here by having better color science and or a grey or white balance routine to calibrate the color table.  There could also be a LUT library made to color correct the output directly.

Roll over Image to see Before and After Color Correction: 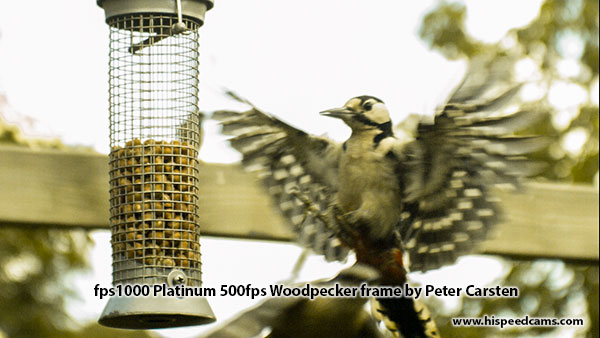 It is clear that the camera is sharp and does offer true 720p HD resolution at 500fps.  This was one of the main points to address around the early image samples; that of softness and the DNG implementation retains the detail that the sensor outputs. This is a very welcome development which means that the fps1000 platform is delivering on the promise of resolution right off the bat.

Color science should improve or at the very least, calibration of color space should be in the cards for a future firmware upgrade.

You will also notice that there is some motion blur on the video images which means the shutter speed was not high enough to offset the motion of the subjects. This can be easily corrected by increasing the setting before shooting.  a shutter speed of 1/2000 on a 500fps camera should yield very good and sharp results.

Congratulations for Graham Rowan creator of the fps1000 on shipping the first Platinum units and achieving the resolution spec, this bodes well for backers of the Kickstarter project and of higher end performing models. Looks like the fps1000 brand is now a hard reality and this should improve your high speed options going forward.

If you are interested in an fps1000 camera and or the project you can visit the official page here!

Many thanks to Peter Carsten for sharing his first imagery with the camera with us. Danke Schoën!