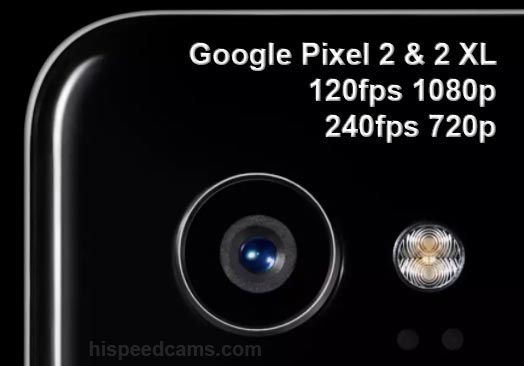 If Slow motion is what you are after and need the Android OS then the Pixel 2 and 2 XL make sense. Last year’s Pixel and Pixel XL will have the same slow motion spec however but in a slightly outdated spec when it comes to performance and processing. The older phones offer a pretty good value now that the Pixel 2s are out. It should be on your consideration list.

We are disappointed by the lack of advancement on the slow motion front but the new Pixel 2 phones are extremely good phones in their own right. If you need the purest Android 8 experience with constant first in line updates then there is nothing better than getting a Google Pixel phone.

On the other hand the iPhone 8 and X are leaps and bounds better phones spec wise in the camera and internal performance. But that would require a switch to iOS from Android which is pretty hard if you rather have an Android interface.  The iPhone will get you 240fps at 1080p and 60fps at full 4k for the very first time on a handset.

Everything From the Google Pixel Event | WIRED:

But the older Pixel and Pixel XL offer the same slow motion performance as these new Pixel 2 handsets for much less money. If you can wait a few months we would recommend to see what Sony and Samsung have in store for a slow motion phone in early 2018 or Christmas 2017. If you already crave the new iPhone 8 or X and need an upgrade we fully recommend it looking at the impressive video performance. No question the iPhones are the ones to beat.

We will have samples of the video modes on the Pixel 2 and 2 XL when available, only then can we measure if the camera is heavily improved or just a mild refresh that is not worth the upgrade.

Google is playing it safe here on the camera front but as a handset, it is a very strong option for performance and everything else!-HSC