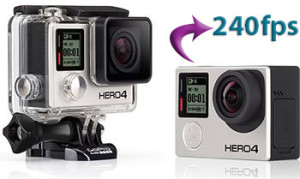 The Hero 4 Black will also gain the ability to shoot 2.7k 60fps which is pretty good for that resolution and makes it ideal for aerial drones.  It seems like Sony with it’s action cam might have forced the hand of the developers to offer enticing features for the Hero 4.  We still think Image Stabilization on the Sony is the most important feature consideration of the two cameras and one that GoPro simply has no game unless you stabilize in post sacrificing precious resolution. It will probably be a feature implemented in future GoPro cameras in order to compete.

Competition is a good thing as it forces a one-upmanship game of specs at ever lower or standard pricing.  We applaud the decision of GoPro to offer buyers of the Hero 4 Black, all that the camera is really capable of without waiting for  a Hero 4+

The Update will be released in February, no word on a specific date but estimation is in the middle of the month.

One thought on “GoPro unleashes 240fps on the Hero 4 Black!”