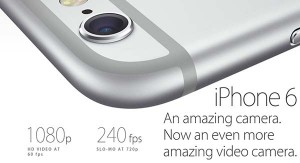 There is no question the iPhone 6 has been anticipated by millions of fans of the phone and or people expecting larger screens on iOS.

The iPhone 6 seems to deliver in all fronts including the latest iSight  camera with the following characteristics.

The slow motion features still remain at 720p and you can choose between 120p and 240p slow motion modes.  The 1080p mode is restricted to 30p and 60p which is an improvement in itself but 120p 1080 would have been better considering Android phones will hit 480p slow motion by the years end at 1080p full HD with a Sony Sensor.

The 720p Slow motion of the iPhone 6 is restricted in specs to 35 Mbps. Not overly high but not all 120 frames will be compressed in that same rate a second, the phone will buffer the slow motion shot and encode to 35mbits later on to produce the final 30p 720p stream.  So the video will be 30 frames at 35Mbps. There is a sample of the video here from the Apple Keynote!

There is no info yet on the aliasing or moire on the slow motion mode but we expect it to improve compared to the 5s good but prone to artifacts image.

iPhone 6 will come in two variants the 4.7 inch iPhone 6 starting at $199 and the 5.5inch  iPhone 6 Plus starting at $299. Its important to note that optical image stabilization is only available on the 5.5 inch iPhone 6 plus. The Stabilization works in video mode so we recommend the larger phone for that feature alone.

It is encouraging to see Apple and other phone manufacturers creating a spec sheet that has slow motion as a primary feature. We expect great things from phones regarding slow motion by christmas. 240fps is just the beginning!

You can already find IPhone 6 Cases From Amazon.com Here!!!