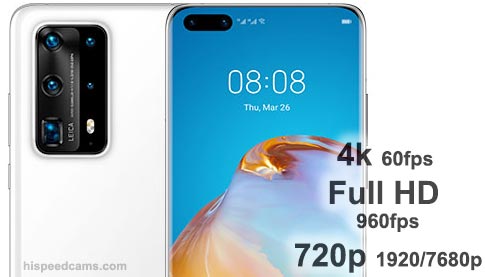 You can see that performance is very good and interpolation is a cut above of any previous implementation we have seen including the Mate 30 Pro of last year.   It seems the focus of last year’s release for the camera was slow motion but now it is barely mentioned in the launch video above, it is merely placed on a slide as an afterthought. Good that they retained it but bad that we did not get 1080p 1920fps instead of 720p. We are told that is a sensor windowing limitation as the phone is more than capable of shooting at that resolution and rate.

Rumor has it that manufacturers are already working on 4k 120fps and 240fps modes with excellent quality which could, in theory, mean long recording times at 1080p at 1000fps and above.  Phones are advancing so fast that we really could see a quality jump in the technology before 2025 that will eclipse many entry-level professional slow motion cameras at least in resolution/frame rate. However, the image quality will probably take a long time to compete with larger sensor camera designs in the 4/3 and up formats which for phones are out of the question.

Huawei continues to advance technology at a blistering pace, we see the P40 Pro as the phone to beat in super slow motion for 2020, it is going to be hard for other manufacturers to match or exceed these specs, if Huawei had no software locks from the US, it would absolutely destroy Samsung, Sony and Apple in the camera department as a first-tier phone.

It is unclear at this time what the slow motion mode allows to record time wise but we imagine it will be the same as last year’s Mate 30 Pro see the specs of that phone below:

Huawei, if you are reading this post, send us a P40 Pro Plus so we can use it as a benchmark for phone slow motion and we can compare it to other slow motion cameras.  Sounds to us that you might have quite a few spare demo units to share.   -HSC