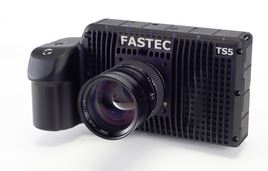 The camera is called the Fastec TS5-H which is an upgrade from previous TS cameras as it delivers full HD performance with a newly developed sensor at speeds up to 634fps at 1080p. 720p on the other hand delivers 943fps which is very close to the 1000fps realm that is almost negligible.  It also captures footage at faster fps at even lower resolutions.

SAN DIEGO, CA – Fastec Imaging announces the TS5-H, a new High-Definition addition to the highly successful handheld TS3Cine and TS3/TS4 “Troubleshooter” high-speed camera lines. Whether it’s used for troubleshooting a factory, or for research in a lab, or bolted to a Kessler CineDrive in a cinematic studio setting, or in a sports stadium… or at the beach, the TS5-H is designed to help any shooter create vivid high-speed video.

Based on a brand-new state-of-the-art 5MP sensor, the TS5-H offers the same convenient touchscreen controls and streamlined workflow as its predecessors, with superior imaging characteristics.

According to Tom Boldt for Fastec, “We believe that compelling imagery is valuable in commercial applications, on public media, in a laboratory, and even on a production line floor.”  Mr. Boldt continues, “In the TS3 and TS4 we have the high-speed camera performance needed for most applications, built into a form-factor our users love, and sold at an affordable price. The TS5-H remains faithful to these same precepts with enhanced performance at higher resolutions, the same revered form factor, and a base price that remains well under $20K USD.”

High-speed cameras generally operate differently than “normal” video cameras. They must often capture events that happen so quickly that they are well under way or even finished by the time an operator can press a record button. For this reason high-speed cameras record into a circular memory buffer that continually stores a couple of seconds of “pre-trigger” footage so nothing is missed due to the slow reaction time of the human operator. The TS cameras operate this way, but they also offer creative recording modes that leverage the presence of onboard storage media. The solid state drive (SSD) option, for example, may be used to save images and free up the high-speed buffers, for direct streaming of high-speed data, or hybrid modes that give the user the most performance and flexibility. 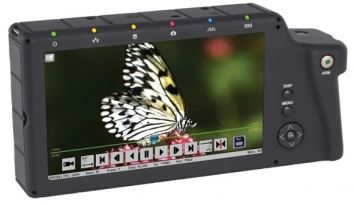 While these cameras at prices close to a compact car are usually out of the realm of small video producers and film makers, it does offer a solution of owning a very capable camera that produces beautifuly sharp imagery with a touch screen and a fully portable high speed recording package; that other brands simply can’t match.    It will also be a good option for renting for a shoot due to low entry price point and easy operation.

For more information on Fastec imaging products and the new TS5-H with samples, follow this link!