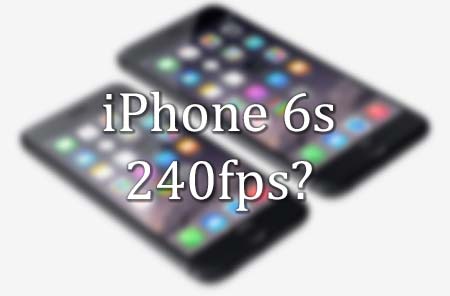 The rumor mill has lit up with all kinds of leaked info about the upcoming iPhone replacement the iPhone 6s and 6s+. When it comes to high frame rates the current iPhone doesn’t disappoint; however the prospect of higher resolution slow motion is tantalizing in an Apple product. The current iPhone 6 spec is capped at 120fps and 240fps 1280*720 HD res and 60fps at 1920*1080 Full HD resolution. While the resolution is hardly to be considered HD at the moment considering it is skipping lines and creating artifacts; the look and feel of the footage thanks to clever processing is not that bad. It is still on the top ranks for slow motion phones to own.

The leaked Specs for the iPhone 6s Unconfirmed:

The blogger Hamza Sood has posted some internal iOS 9 code hinting at several features for the new devices.  The slow motion features seem to be ramped up but still stuck at a 240fps top.

For the source of the rumors and leaked images regarding the iPhone 6s follow this link SOGI in Taiwan !

What is really new?

For starters we now might have 120fps at full 1080p HD in the iPhone 6s as opposed to the cap of 60p at full HD in the regular 6 variant.  At the same time both the front facing and back cameras will be slow motion capable not only the back facing as in the previous model. 240fps will still be available as a slow motion option but also included in the front facing camera. Super slow motion selfies anyone?

We do not believe at this time that higher frame rates above 240fps will be available on the upcoming iPhone 6s; however this could change but it’s not very probable.  The iPhone 7 in the fall 2016 will be our best bet of increasing frame rates on Apple devices.

With the upcoming competition from Sharp Aquos Phones that do simulated higher frame rates and the still to be released variants of the Mediatek Helios based Android phones at up to 480fps full HD recording Apple will have some competition in the space.  However it does show that high frame rates are a feature that is here to stay in the iPhone line and iPads, as these phones rarely disappoint it will be a coveted portable video machine with 4k and slow motion in a good enough quality to be useful.

Once information is confirmed we will cover everything about the iPhone 6s camera performance. Thanks for reading!