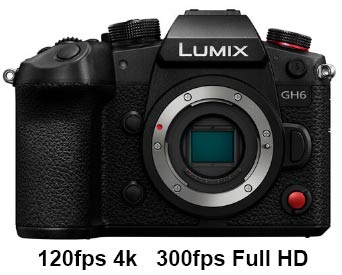 The GH6 has a new sensor, new Venus processing engine, new IBIS with up to 7.5 stops which is bordering on ridiculous, and a body that has active cooling. For HSC however, only one set of specs matters and that is frame rates for video. The camera is now on top of the Lumix and almost all of their pro division cameras by shooting up to 300fps 10 bit Full HDish, 240fps Full HD 10bit, and 120fps at 4k 10 bit.  For slow motion enthusiasts, it looks to be a great camera on paper and at just under $2,200 USD it is not going to break the bank.  But after all of this, should you invest in the GH6 as a slow motion tool or save more for an affordable dedicated high speed camera?

As you can see the GH6 is the most powerful video and photo camera to ever grace the Micro 4/3rds format. The 5.7k video at 60p and 4k 120p 10 bit is just fantastic but the VFR or Variable frame rate mode offers 240p and 300p frame rates in Full HD 1080p which finally breaks the 240p limit on Lumix cameras. We are very glad that this 60fps bump was made to the Lumix line which may possibly bring it to Full Frame Panasonics in some time.  The only caveat that we can point at is that 240fps is a 4:2:2 10 bit format but 300fps has a slight resolution drop, 4:2:0 color, and bitrate is limited to 200Mbits/sec.  It seems 300p is so taxing that it simply cannot record in the full line of codecs.

We were able to see some samples of the 300p mode and while it will not be as detailed as regular 1080p modes, it is a clear step up in reduced aliasing and softness from other previous Lumix cameras which sacrificed a lot for VFR convenience.

We were able to see some VFR shots on Youtube by digging in the reviews of early camera samples distributed to influencers.  It is clear the camera is ready for some serious shooting and 99% complete. There is a slight banding problem when shooting bright illuminated lights that Panasonic is working on fixing with firmware as it creates some electronic pattern of horizontal lines that could ruin some specific shots.  However, there were no big image quality issues with most testing. The camera performs better in low light than the GH5 and holds its own to the Gh5s up to ISO 3200, after that it quickly descends into heavy noise.  Stay below ISO 6400 and it should be more than good.

The camera is not using Dual ISO like the GH5s and it does have an added dynamic range feature called Dynamic Range Boost or DR Boost which does add a lot to shadows and highlights but will force your camera to shoot above ISO 2000.  Using it with good light is a must in this mode.

You can get a pretty good VFR 300fps and 240fps footage sample in this DPreview of the GH6 by Chris & Jordan. The snowball-hitting-face shot does show a slight decrease in quality on the 300fps mode vs the 240fps mode not just in color but it is slightly softer. One other thing to point out is that the 240fps mode does record audio and can play it back in real time or slowed down which will bring a whole new dimension to these shots in Lumix cameras which had no Audio on VFR modes. 300fps mode lacks audio and Autofocus while both are present up to 240fps.

Does it break the mold and extends the life of Micro 4/3rds?

The GH6 is a camera that brings out a plethora of features that only cinema cameras are privy to. It has waveforms, Luts and Anamorphic modes that make most other cameras jealous. It has it all for small medium and some large productions that need a camera to place in tight spaces or as a crash cam.

It is by far the most feature-rich and excellent performer of the Micro 4/3rds Lumix line of cameras and it is a worthy successor to the GH5 which is by now a staple in the indy video world. The format is still very important for people who want portability, smaller lenses, excellent IBIS Stabilization, and no overheating.

The big issues with the GH5 and other cameras was the lack of a Phase detect and Contrast hybrid Auto Focus mode like Canon, Sony and Nikon offer and it is rock solid in video. The Depth from Defocus contrast only AF is also on the GH6 and no Phase detect yet again.  It has improved in speed and tracking markedly even from the S series of Full-Frame cameras but still suffers from pulsing backgrounds as the focus hunts around.    Panasonic really needs to ass a Phase sensor even in the camera body to assist the Contrast AF to be able to estimate a locking range instead of guessing while not fully capitulating to a Phase detect hybrid system like that of the competition.

For many users, Full Frame with the impressive low light performance and ultra wide options will trump Micro 4/3rds any day.  For others, the benefits of a smaller format are enough to keep their investment in the 4/3rds system longer.  We feel however that with the miniaturization of Full Frame cameras, price decreases and the quality difference in low light will win out over time.  What Panasonic has to do is have an S1H Mark II camera with all of the features of the GH6 and a Phase detect hybrid AF system, this will assure class leading performance and brand penetration from all sorts of users including Micro 4/3rds switchers.

Panasonic GH6 – One Great Reason to Switch Back to Micro Four Thirds by Kai W:

Panasonic makes some of the best bodies and features out there, especially for video and the GH6 shows how advanced that is. At $2,199 USD body only it is really a bargain for what you get. If you add a speedbooster then you can get a slightly better than S35 wide sensor conversion at the cost of the AF features. In the end, the GH6 is a camera that shows Panasonic being serious about the format but it may be the last camera of its kind released for it. We really cannot see a sensor leap that could get the quality of FF cameras without a big jump in low light performance along with computational processing to get there.  Who knows maybe Panasonic will release a GH6s with dual ISO and lower Megapixel count but somehow we think it will not be the case as a lower megapixel camera will not be able to deliver above 4k resolution which is one of the main selling points of this camera.

We still feel that buying a dedicated slow motion camera like the Chronos 2.1 HD for just under $6k USD makes more sense if slow motion is your primary focus as that camera will do 1000fps at 1080p in RAW or H.264 and over 20kfps in other formats. See our end of the year 2021 write up here!

We will have more video samples of the VFR mode as they become available, as a slow motion camera for now, it will rank higher than any mirrorless camera due to the inclusion of very good 300fps 1080p mode and excellent quality 120fps 4k which is indistinguishable from 24p 4k which is more than amazing.  Thanks for reading -HSC

You can pre-order the GH6 here at Adorama Camera and help HSC without any extra cost to you!