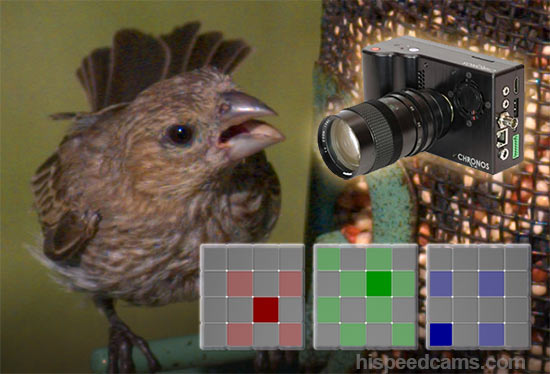 The Chronos 1.4 team has been hard at work on firmware improvements. The latest pre-released software patch shared with HSC improves the h.264 file quality at the pixel level by using a new demosaic algorithm to better match the real camera output.  We did a few sample tests to see how big an improvement it is and also to maybe ditch the slow and space eating RAW 16bit workflow which is our preferred file saving format as it retains all the sensor information.

The new improvements are already available to the community as a beta in this post. It is very stable it should immediately improve the way you work with the camera. Also, a new roadmap of upcoming firmware releases was shared in the forums which include HDMI monitoring and a complete OS change to Debian Linux from the current Arago distro for the camera which should improve development and speed in implementing features.

We were given the opportunity to test the new software a few days ago and while we have found a few minor glitches here and there which the development team is aware of, the camera is heavily improved in the h.264 video quality.  We see better moire and aliasing control across the board compared to the previous implementation.

Notes from Krontech on what changed for h.264: “This replaces the old bilinear demosaic with one based on AHD (Adaptive Homogeneity-Directed), with some modifications for fewer color artifacts around single-pixel objects, and lower resource utilization.”

As you can see from our frame grab above there is a pretty nice improvement in the h.264 files from the Chronos 1.4c using AHD. You can see reduced color moire and reduced aliasing with much less mosquito noise artifacts which were pervasive in the earlier demosaic method.  Notice the feather detail in the bird getting an acceptable rating now before unacceptable before. Still RAW wins easily by saving perfect detail.

The differences in color are also apparent between RAW and h.264 which shows how the Adobe Camera RAW DNG converter in default settings trumps the compressed format in color fidelity and contrast.  That doesn’t mean the h.264 file cannot be improved in post since you are getting a somewhat flat curve profile by design from the camera to save the most dynamic range possible and with a little Noise Reduction and Unsharp Mask, the images become much more pleasing.

The chart test which was better matched in color and contrast in post shows that the h.264 detail is better than before in most metrics but still is a far 2nd place to the RAW 16 bit DNG files. While color moire is visible on both samples to an extent the criss-cross nature of the demosaic from the compressed file shows up in high detail and in the text where it loses resolution.   If you need the utmost quality from the Chronos 1.4 files there is no substitute for RAW capture yet.

In the footage samples above you can see how h.264 vs RAW 16 bit compares in the exact same captured clips.  One benefit of the Chronos is that you can save the same captured memory to a variety of formats before advancing on to clear the buffer. This permits us to save the exact same clip in both compressed and RAW formats for direct comparison.  We adjusted curves and contrast on some h.264 clips to better match the default Adobe Camera RAW  settings which do an amazing job out of the box preserving detail at every pixel site and maximum color fidelity.

The RAW format is also better at handling noise since the RAW converter is doing some de-noising as default. Even when Adobe Camera RAW was set to NR 0  the noise was less visible than on h.264, especially in the shadow areas.

The camera needs black calibration to get noise and banding down like any other camera. We have found that you need to do at least 2 black calibrations spaced 20 minutes apart to really allow the camera to warm up and reduce the banding and noise.  Once the calibration is done the images are very pleasing with the ability to reduce the noise in post even further with de-noising software.

Our Initial Conclusions on the new Firmware:

The Chronos team is advancing rapidly towards a feature complete software for the camera.  This new demosaic algorithm makes it possible to preserve image quality in a better way compared to previous releases. However, this does not make it a complete replacement for the RAW data capture. You lose color accuracy, you sacrifice per pixel detail and the de-bayering algorithm Adobe is implementing for the RAW DNG data in Camera RAW is an outstanding piece of code that really makes it look as sharp and detailed as a 1080p full HD image. The h.264 in the camera still now is not a replacement if uncompromising quality is what you are after.

For us, at HSC we value image quality right up there with frame rates in a slow-motion camera.  The Chronos is capable of producing some of the best 720p video imagery we have ever shot with when using RAW. The new demosaic patch brings it closer to usability and will save the day when the speed and storage needs of RAW 16 bit capture can’t be met.  You cannot put a price on time and the savings from h.264 are extremely significant by saving anywhere from 10x to 14x faster than RAW 16bit into the SD cards or even a USB Hard drive.

Without any reservations besides a small glitch that has dark lines above and below in the h.264 frame “Which the Krontech team is aware of and will correct soon” we recommend you install this new patch which is very stable. We ran the camera for about 5 hours without any issues in Southern California heat which is now a toasty 84° F or 28.90° C.

You can download the new firmware demosaic patch (Here) after you apply the regular v0.3 firmware (Found Here) .  Be sure to do it in this order:

Please share your Chronos software testing anecdotes below and findings regarding the new firmware patch. The work on the firmware is ongoing and constant, be sure to check the Krontech forums here for more information about the camera and the community using it.  -HSC

Upcoming Software Roadmap for the Chronos 1.4 including an OS Change and the much-awaited HDMI Out for monitoring:

The team at Krontech is getting a lot of features implemented on the camera. The ones to look out for are HDMI out, faster RAW recording and Native Camera Support for native DNG sequences without having RAW files be converted on a computer afterward. All three features would be big workflow improvements and many more are planned.  The new software team at Krontech is speeding development tremendously, hopefully freeing David Kronstein up to build and design new cameras for the future which is his forte as a hardware engineer. -HSC

The following is a direct quote of a post at the Krontech forum here from developer DDR:  Original Post Here!

What is happening with the Chronos’ software? What is in the works, and when will it be available?

Keeping in mind “The best laid plans of mice and men will often go awry”, here’s what we have planned:

Behind the scenes, the main delay is that we’ve discovered that it’s impractical to continue development using our current operating system, Arago Linux. It lacks some basics such a C compiler, a scripting language, and several basic Linux debugging utilities. Arago’s video subsystem also crashes after saving 45 videos.

For example, developing the back-of-camera user interface using Arago entails a ~5-minute delay between making a change and seeing the change in the UI. Using Debian, changes made to the UI are live in seconds.

We’ve been working on getting Debian running, on and off, for the past year. However, a few months ago a combination of near-success and issues with Arago’s video system meant we decided to officially devote engineering time to the problem. This, naturally, delayed the progress we were making on the internal D-Bus API for 0.4.0, because now we were working on something else.

Currently, from my user-interface-centric perspective, here is how our progress is looking for version 0.4.0. The new UI and APIs will be debuted when this is complete. Green means “completed”, yellow is “in progress”. Arrows show what depends on what. For example, the final implementation on the right depends on the D-Bus API, which has had the video control component made, and the D-Bus API Mock, which is currently being developed. Implementation is done by adding behaviour to a laid-out UI (labeled “Shell & Nav”), which I sketch up in Designer as a separate step. Each screen can be done more or less independently.

I hope this helps clear things up. I’ll try to keep this thread updated as things progress. One of the big reasons we don’t like to announce things is that they frequently turn out to simply be untrue. For example, we thought we’d fixed raw save speed, but then it turned out we hadn’t a few times. We really don’t want to promise something we won’t deliver on, so we keep to ourselves quite frequently. What are your thoughts on this?  -DDR