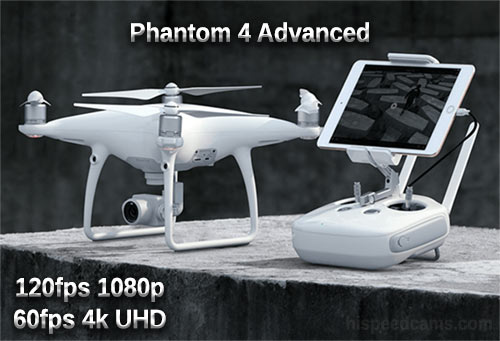 DJI’s refresh of the Phantom 4 is a mid-range model that sits between the Standard Phantom 4  & Phantom 4 Pro.  It has either a few features left out from the Pro and or some added from the standard model that make it into a category of it’s own.  The camera however seems to be identical the the Phantom 4 Pro which supports 4k at 60fps.

The UHD 60fps video spec is finding it’s way into more and more products as it becomes popular on video social media sites like Youtube and Vimeo.  Consumers expect the ability to have some slow motion capability on 4k without dropping resolution to 1080p or 720p. However the 120fps spec at 4k might take a few more years to become commonplace due to data rates which will push storage requirements and tax processing capabilities.

As you can see from the specs above you get slow motion in 1080p Full HD 120fps with H.264 codec but not with H.265 which is limited to 60fps. The processing requirements of H.265 are so high for encoding and playback that current solutions are simply not fast enough to work at higher than 60fps frame rates. The same issue is also present in 4k modes as the H.265 while a more efficient codec it drops support for 60fps all-together.  If you want to use the higher frame rates on this drone you will have to use H.264 as your codec of choice.

In our view H.265 while a more efficient and modern codec with support for better frame motion prediction, compression and detail retention ; makes for a heavy burden on camera systems today. When new faster encoders surface with good battery life to boot, we expect H.265 to take the crown for all types of capture devices. Computers, tablets and phones will also need to support H.265 playback natively which is now hard to edit and play back on most systems.

So what is new and what has been taken out?  From DJI:

1. What are the main differences between the Phantom 4 and Phantom 4 Advanced?

The Phantom 4 Advanced’s updated camera shoots 4K/60 fps video at a bitrate of 100 Mbps and stills at up to 20 megapixels. It can be used with an optional integrated monitor for even more reliable transmission. Operators are empowered with a new suite of Intelligent Flight Modes.The maximum flight speed of the Phantom 4 Advanced is slightly higher than the Phantom 4 when flying in P-mode. The maximum flight time is extended to 30 minutes, the transmission range is extended to 7 km, and the obstacle sensing range is increased from 15 m to 30 m.

2. What are the main differences between the Phantom 4 Pro and Phantom 4 Advanced?

Phantom 4 Advanced is NOT worth it | Compared to Phantom 4 Professional by Jeremy Judkins:

So why not just get a Phantom 4 Pro?

For $150 dollars difference we definitely recommend going and buying the Phantom 4 Pro instead of the new Advanced.  The Video by Jeremy Judkins above makes a very compelling case to skip this new drone entirely.

The fact that you get reduced sensors by stripping the back and sides of the drone; only offering bottom and front sensors which is reminiscent of the DJI Mavic a much smaller and cheaper alternative.  Also the 2.4Ghz frequency is all you get in the Advanced with the Pro offering the 5.8Ghz Band as an option.  There is no question your drone longevity will go further with the Pro model.

The cameras are the same in the Pro and Advanced models so that is something to consider if you do not mind the lower specs on the sensors and frequencies.  However if your drone collides and or looses connection you will be glad the Pro version had more safeguards to make that possibility less likely.

The original Phantom 4 is now discontinued so the Advanced and the Pro are your only options. You can get it from DJI store directly below or Amazon.com with the Phantom 4 Pro which is a much better deal at $1424. 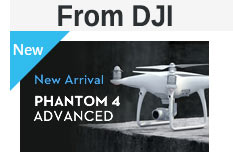