In part one and part two of this article series we took a good  look at the free options available to take care of flicker for timelapse, regular footage and high speed over-crank video. For part 3 and 4 we will look at the paid options.

Back when the digital timelapse craze in the early part of the last decade was in it’s infancy there were no real options for flickering adjustment for timelapse sequences.  In came GBDeflicker from Granite Bay Software in California.

The application plug-in for Adobe Premiere and After Effects works amazingly well when applying it to timelapse sequences as it restricts the histogram changes to a specific range and normalizes the changes over time to create a non distracting flicker free result.

Over it’s life it has gained in speed and the algorithm has been tweaked to work on ever more challenging lapse sequences. Now in Version 3.0 it has more options to tweak and alter to work on the image sequence you are throwing at it.  Now you have an analyze histogram function that does a sweep phase to adjust the footage initially for further tweaking if desired. 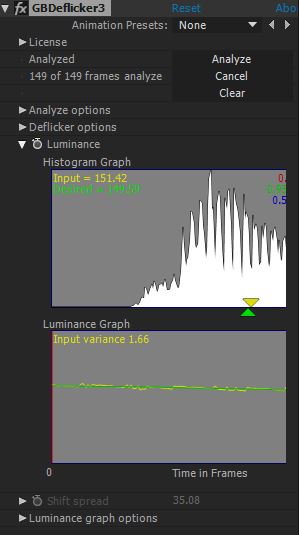 Once you have analyzed the footage you can use frame smoothing to blend the resulting images and extend the correction over multiple frames for a better result. The limit of frames in V3.0  is 60 which is 30 frames more than version 2.

Below you can see the compatibility table for the application which works from CS6 to the present CC for Mac or PC:

There is also a standalone GBDeflicker 2.0 application that works on image sequences and no video which won’t require an Adobe product for it to work.

GBDeflicker did quite well with most of the timelapse sequences and some archival old footage we threw at it but has trouble eliminating any sort of CMOS banding or flickering lights in a room and did not perform well on hi speed footage.  To be fair the application is designed for timelapse and not regular footage and in that application; GBDeflicker is a pretty good solution.   This used to be the go to application for many years regarding timelapse flicker control.  It will help to get that brightness change generated by the light source intensity alternating abruptly like the sun behind clouds or the aperture in the lens variance that comes from electronic lenses like those from the Canon EF mount or Panasonic Lumix.

If you just plan to use GBDeflicker for timelapse fixing you can give it a try with the trial version “Includes a watermark on output” but you can fully test it’s features before you decide on a purchase. The Standalone version is also available.

For regular footage especially slow motion and banding in the shot, GBDeflicker in it’s current incarnation cannot cope with the problem. But if timelapse flickering is the vain of your existance then we suggest you give GBDeflicker a try.

GBDeflicker has a price tag of $99 US Dollars or $59 for an upgrade from older versions.

You Can buy GBDeflicker Here!

Stay tuned for part 4 of this article… thanks for reading!

More GBDeflicker Videos With the Software Applied Below:

Clouds Before and After:

GBDeflicker BEfor and After Field

Disclaimer: We are not affiliated with GBDeflicker or Granite Bay software in any way. We were not influenced in our review of this product by the creators of the software.