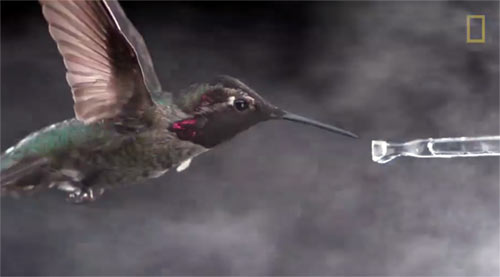 The National Geographic Channel in conjunction with  Clark lab at US Riverside, Dudley lab at UC Berkeley,   have posted a video that shows the process of capturing hummingbirds in flight, feeding, and doing acrobatics all in glorious 4k at 2000fps.  It is probably the most scientifically worthy portrayal of hummingbirds in flight ever to be documented.

The intricacies of flight, hovering and coping with the environmental elements that hummingbirds have to fend off and how they accomplish it are now being deciphered with the help of 4k Phantom Flex cameras in great detail mainly shot by naturalist filmmaker Anand Varma.  This is all part of a recent National Geographic story on hummingbirds here!

Of note is that the video claims might be inaccurate and only be shot at 1000fps which is the maximum frame rate of the Phantom Flex 4k camera. The video claims 2000fps at 4k which is probably a typo.

Footage Information by Nat Geo and the Scientists:

Once, high-speed cameras were ungainly contraptions, difficult to operate and lug into the field. Now they can fit in a large pocket and are as essential to hummingbird biologists as binoculars are. The sheer magnitude of information captured by these cameras can be hard to fathom.

The first attempt to analyze hummingbird flight is believed to have occurred in Nazi Germany in the late 1930s. Two German ornithologists secured a camera capable of recording 1,500 frames a second. “The regime was developing the first helicopters,” says Karl Schuchmann, former curator of birds at the Alexander Koenig Zoological Research Museum in Bonn. “They wanted to know how birds could hover on the spot.”

In the United States, Crawford Greenewalt had served science on the opposite side of the war effort. A dozen years after the German ornithologists published, Greenewalt picked up the thread of their investigation. His wife, Margaretta, had become interested in bird-watching, and from her, Greenewalt caught what he called “hummingbird fever.” His hummingbird photographs were first published in the November 1960 issue of National Geographic.

Today, Anand Varma continues this legacy by filming hummingbirds like never before: with a 4K camera that is capable of capturing the bird at 3000 frames per second. This behind the scenes video gives a sneak peak into Varma’s process and passion. To read the entire July 2017 article on hummingbirds, click here.

You can see the video here at Nat Geo’s Site:

What It Takes to Film Hummingbirds in Slow Motion:

This video was based on research done by Clark lab at US Riverside, Dudley lab at UC Berkeley, and the Altshuler lab at the University of British Colombia. The photographer would also like to thank Victor Ortega-Jimenez, Katie Johnson, Sean Wilcox, David Rankin, Nicholas Donnelly, and Tom Adams. Learn more about photographer Anand Varma and his work here.

Here is one more video from the series that you may be interested in: