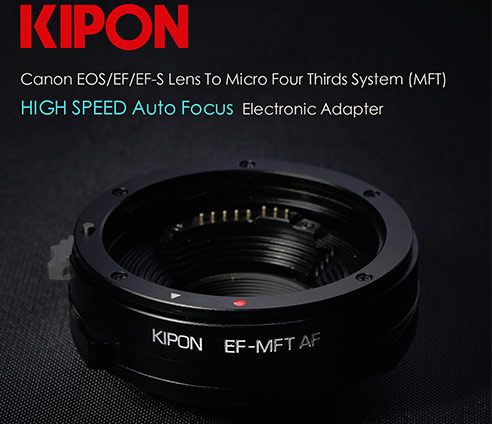 A few weeks ago the Kipon full Auto focus, Iris and IS enabled EF to M43 adapter was announced. Many huge doubts lingered to it’s effectiveness in Auto Focus as any other AF adapter for the likes of Sony cameras for example take several seconds to lock onto a target.  The Kipon promises to be a seamless adapter for Canon EF lenses on Micro 4/3 system cameras like the Panasonic GH4.

Today it released a few videos showing the Auto Focus AF capability of the adapter in action and it is very impressive to say the least, it also works with EF-S lenses which is a plus.

The videos clearly show that the focus ability is determined by the camera body AF system.  If placed on a GH4 it should inherit that camera’s very fast AF response.  This is great news for Micro 4/3 system converts from Canon.  All your lenses that up till now used a Metabones adapter without AF will now be able to be fully utilized.  Metabones sure would make good use of this technology. They should license the technology in the adapter by Partnering with Kipon and deliver a speedbooster with full AF for M43.   Since many of the speedbooster M43 adapters are firmware upgradeable with a built in Micro USB port, it could be made available to current owners at a license price. The game has changed in M43 adapter land and Metabones needs to catch up.

The bad news for slowmo:

The AF could in theory work with M43 cameras in slow motion mode but that will be limited as in the case to the GH4 at 60fps in 1080p.  The 96fps mode is Manual focus only in the body which means this adapter is of no real use while in that mode.  However if used in regular modes you can use the AF and lock on a target and then change to 96fps mode and start recording.   In the end however until a GH4 successor offers AF during high speed video it will remain a MF affair.   Slow motion capture is mostly about MF as you need to usually plan the shot ahead of time. The Iris and IS control on the lenses will be useful for all modes including slow motion so that is  a major plus.

For the upcoming fps1000 this adapter does nothing more than a regular passive or dumb adapter as the fps1000 will have a non electronic M43 mount.  Your EF lenses will work on that camera but you are better off grabbing a cheaper non electronic adapter for it and manipulate the IRIS on another camera body. 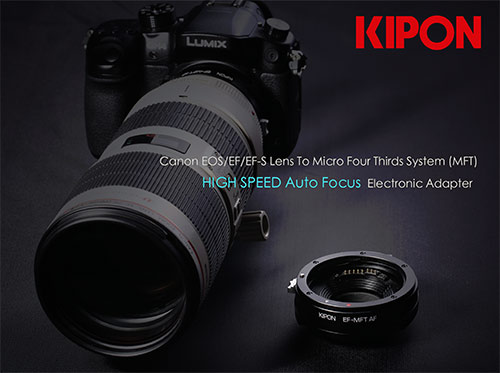 The official market price for this adapter is $285 USD  and will be on sale starting May 10, 2015. Since the company is based in Shanghai, China you will need an importer to deliver it to your location. That usually means relying on eBay dealers.

>Link to Kipon M43 to EOS EF Adapter on eBay<

We found a first seller that has the adapter listed for $339.00 That is just under a 19% increase from the release price.  However that includes free expedited shipping to the US.   And that doesn’t include a potential customs tax on importing the item.  We expect these adapters to find their way to US and European shores later in the year where they can be acquired from a local seller at a slightly higher price.

HSC will get this Adapter when it becomes available in quantity this year. Our collection of EF lenses will be happy to have a go at it. Thanks for reading!