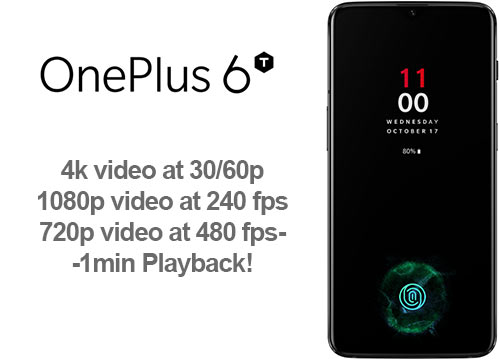 Big changes compared to the OnePlus 6:

For about a $20USD difference we would have to say the 6T is the clear winner here as you get a more capable better-looking phone with in-screen fingerprint reader. If you already have the OnePlus 6 then the 6T is not really a big enough upgrade. What is clear is that OnePlus is not resting on its laurels and is releasing some of the best phones in the market today with cutting-edge features at a price that is nearly half of the Apple or Samsung flagships. There are some that will not touch these phones due to Oxygen OS and the Chinese spy craze but for most regular users that are not in critical jobs, these phones offer some of the best value and performance around.

As you can see the OnePlus 6T which shares the same camera module and software as the regular OnePlus 6 is no slouch when it comes to slow motion capture. The 480fps mode is 3.75 seconds rec time which eclipses all other phones before it which max out at 0.4sec rec times in a higher 960fps but very unfriendly time frame.

In fact, the OnePlus 6 and 6T are in our view the best value slow motion phones out there in price/performance. At under $600 both phones are cheaper than other alternatives except the Sony XZ2 which does 1080p 960fps for 0.1sec which is ridiculously limiting. We would take the 480fps 3.75sec rec time any day over the 960fps mode on other phones because it is really usable. It may also be the golf swing portable recorder you have been dreaming about for quite some time.

Looking at where OnePlus is going it seems they may be on their way to 960fps for their next product and hopefully bring 1080p 480fps forward with a  720p 960fps mode to boot. At usable recording lengths, this phone so far in our view is unbeatable for the price and performance and have no issue in recommending it.  If you already own a OnePlus 6, the 6T will not improve your slow motion but if you are on the market for a relatively affordable flagship phone then the OnePlus 6T with its awesome video modes is hard to beat in 2018. -HSC

4 thoughts on “OnePlus 6T Keeps 480fps Along With Some New Features!”