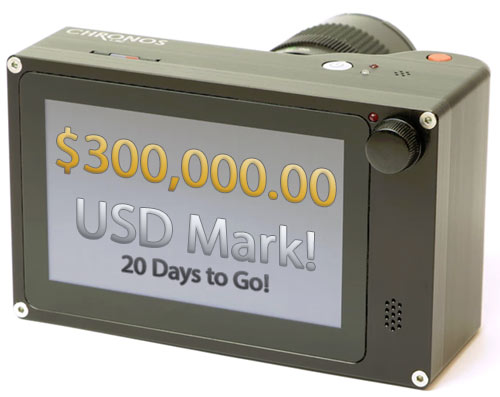 A company like Sony which has provided acceptable results with their RX100 and RX10 series lately in the low end of the range has the resources and technology to create something truly revolutionary in the high speed segment with a real professional high speed product launch.  However we will have to do for now with the talented engineers that do create these fully featured cameras for the rest of us.

There were two funding stretch goals with the campaign:

The WiFi dongle support is unlocked which probably means a simple USB WiFi module will be supported in the software by the needed drivers. This will probably allow the camera to do some wireless monitoring and or file transfers which should provide labs, TV people and dedicated enterprise users the means to have the camera in a sealed blast enclosure and still make the camera work without the need for wires. Kickstarter Campaign Here!

The Android remote app goal at $400k is closer now than ever and with 20 days left it might see the light of day after all.  David Kronstein the creator and his  engineering guru Matthew Peters have their work cut out for them needing to deliver all these cameras and probably the App will be released much later in order to fulfill production.

The camera has already been used by a few labs in beta form and you can see the video below for a fantastic 360 degree Matrix style Bullet Time effect using the global shutter on the Chronos to full effect.

“Bullet Time” with the Chronos high-speed camera by Applied Science:

The team also posted a behind the scenes video on the making of the Chronos 1.4 Kickstarter campaign which was fully shot with the Chronos Camera. Nothing like marketing a camera and using it to do it at the same time; many bigger vendors use other tools for shooting their camera gear and this speaks volumes of the robustness of the Chronos high speed camera.

Chronos 1.4 – Kickstarter video behind the scenes by tesla500:

The video below shows the features and components of the Chronos 1.4 High speed camera:

David has also posted a comparison for the Chronos 1.4 when shooting in Color vs Monochrome/Black & White so you can see which camera you need.  In our article The Case for Monochrome High Speed we analyze the reasons why you may actually want to buy a Monochrome over color depending your intended usage.

For TV and Film people the Chronos Color would probably be the way to go but for laboratories, and scientific testing the Monochrome offers much more latitude, low light sensitivity and detail per pixel which can yield much better results.  The Kickstarter price is identical so it is not a money decision.

Chronos 1.4 high speed camera review and comparison to Phantom Flex 2K by Beyond the press:

You can check out the Chronos 1.4 Kickstarter campaign here and get yourself a Camera Kit by pledging on one of the packages before the 20 day window is out.

We will continue to revisit the Chronos 1.4 Campaign and camera in the near future. Hopefully by March next year we may have a final shipping unit for review on our hands to finally have it ranked in our HSC Slow Motion Camera Guide! – HSC

Disclaimer: We do not promote the purchase or backing of any Kickstarter or similar campaign directly. We at HSC only analyze and present the information available on diverse high speed cameras. The decision to back a project or purchase a camera is entirely your own and not the responsibility of HSC!