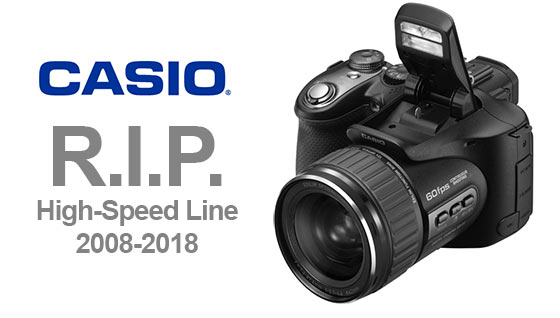 The Japanese hi-tech company generated a loss of 500 million Yen (or $4.6 million U$) in the 2017 fiscal year for the division. They will effectively pull out of the market to stop the bleeding.  It is quite sad to see a company that created the EX-F1 and the excellent EX-FH20 eliminate their entire consumer camera division. Could things have been different and could they have avoided the phone camera erosion that has obliterated the sales of most manufacturers? Our only thought would be that they did not innovate fast enough to remain competitive for the consumer to be a real alternative.

Could this have been prevented?

Casio was on a roll in 2008-2010 with the introduction of their new high-speed camera line which was first to record 1080p 60fps and up to 1200fps at reduced resolutions with the EX-F1. It was for a while the only game in town when it came to a truly affordable slow-motion solution for the common videographer.

There were a lot of constraints when it came to real resolution and artifacts but these cameras were a milestone of miniaturized technology and what could come after if they had continued development.

But Casio seems to have lost its way after that initial big push. Many fans of the camera line expected more resolution to supplement the frame rates and maybe make a jump to HD 720p at 480fps which would have cemented the camera line as a true performance speed demon.

Now that we can see the whole picture from beginning to end for these Casio cameras, it is clear that they rested on their laurels while technology advanced past them. Companies like Sony not only caught up but went ahead and improved on the slow motion high-speed performance in both stills and video with the Sony RX line and their excellent RX100 V and RX 10 IV which earned our top marks last year. Those cameras rely on better/faster technology with a stacked CMOS sensor technology that is now becoming commonplace in the premium smartphone space.

We can’t help but feel nostalgia when looking back at the Casio brand and see the missed chance at dominating the high-speed market. They produced excellent cameras that were so far ahead of their time back in 2008 that they could have improved at a reduced clip for many years and still be ahead of the pack. They wasted that future by creating unmemorable cameras with watered down technology.

The positive side of all this is that we now have cameras like the Sony RX line, Panasonic Lumix Line, Sony & Samsung Smartphones with 960fps and professional slow-motion cameras like the edgertronic and Chronos 1.4c to fill that void .

Slow-motion today is more affordable and plentiful in quality options than any time before.  We may owe some of this adoption speed to the engineers at Casio that made these awesome cameras 10 years ago.  They really advanced things forward by showing us it was possible to do this without breaking the bank at a time when the cheapest high-speed solution was costlier than a luxury German performance car.  R.I.P. Casio Cameras, hopefully not forever! -HSC