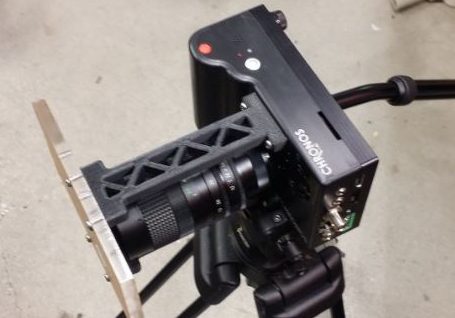 There are just over 5 days to go before you can back this campaign. The 180 backers of the project are eager to get the camera scheduled to be delivered early next year by March or May depending on the pledge time.  The early bird backer production is one week early according to David Kronstein the creator. PCB boards were sent for production last Sunday!

There was also a podcast from Woodshed Agency recorded with David Kronstein that we highly recommend you listen to below:

Beta users of the camera have also been busy shooting cool footage with it see the new examples below “BTW-Don’t Try This At Home”:

ShockWave Explosion at 4000fps with the Chronos 1.4 by Experimentboy:

Ring of Fire XL and some other gas torch stupidity by Beyond the press:

Will it Mow? VHS Tape by Will it Mow / David Kronstein?

There you have it, the Chronos 1.4 is a fun and capable camera to use and one that will not break the bank. We expect to have one early in 2017 so a full review will follow.  Congratulations to David Kronstein and his team for the Kickstarter campaign success, leveraging connections, social media and good engineering has paid off.  We expect great things in the future from David including other cameras now that the genie has been left out of the bottle.

To back and get yourself a Chronos 1.4 High speed camera of your own visit the Kickstarter Project Site:  https://www.kickstarter.com/projects/1714585446/chronos-14-high-speed-camera/description

Disclaimer: We do not promote the purchase or backing of any Kickstarter or similar campaign directly. We at HSC only analyze and present the information available on diverse high speed cameras. The decision to back a project or purchase a camera is entirely your own and not the direc or indirect responsibility of HSC!