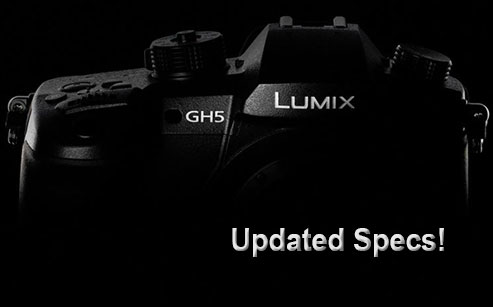 The Panasonic GH4 still is a very popular camera for enthusiasts, film makers and mirror-less fans.  It is one of the few high quality consumer priced cameras that shoot 4k still today two years after it’s introduction.  It is a tall order to improve on it sufficiently to warrant current owners to upgrade in droves and make long time Canon, Nikon or Sony owners witch to the Lumix Micro 4/3ds platform. Click for Updated Article Here!

The specs for the Panasonic GH5 continue to flow from a few months back when it was first teased by Panasonic; some of the new info seems to be from controlled marketing leaks to keep interest in the product but so far when it comes to higher frame rates we are still waiting for any confirmation of a 120fps spec.

What we know to be solid today. “Some of this information is derived from http://www.43rumors.com/ which is the premier site for the m4/3rds system rumors”

Slow Motion on the GH5?

The inclusion of 4k 60fps is technically slow motion but nothing earth shattering. Still it is very good to have if your edit timeline is a 24p 4k master file.   Few cameras offer 60fps in UHD or 4k and the GH5 by having it should be relatively secure for the next two years as a high end video spec.

But what we are waiting for is 120fps 1080p slow motion capability which is now widely used in Cellphones, mirror-less cameras like the Sony a6300 and a6500 and completely obliterated by the Sony RX series specs with near full HD 1080p 240fps for 4 seconds like it is the case for the Sony RX100 V introduced a couple of months back.

Should we expect it to surface in the GH5? The Panasonic Lumix Marketing team behind it has to save some earth shattering specs for the final reveal some time in January or February next year. What we know is that the development of the camera is complete and any hardware specs that were tapped out will be the ones that remain. If the slow motion spec of 120fps or more was not included by now in the design the camera will probably not be able to do it later with firmware updates.  In order to remain competitive we feel that this spec of 120fps which improves on the GH4’s 96fps recording should be included as a bare minimum.

The GH5 has to have a very big following for the camera to best it’s predecessor and to remain a big money maker for Panasonic. The fact that most camera sales have dropped off a cliff with the introduction of better cellphone cameras doesn’t help camera companies to continue development of all of these new technologies by investing heavily in R&D.   If the returns are sub par, then why make them at all?

What we do know is that the mirror-less professional camera market is still hot in sales compared to Point and Shoot cameras and a GH5 should be able to outsell the GH4 with room to spare considering how much stronger the spec list is with 4:2:2 color space recording “see the excellent video above by Griffin Hammond“ and IBIS sensor stabilization which will give all adapted non electronic lenses new life by making them steady. This perhaps will be the best argument for an upgrade from every other GH camera before it.

One positive from camera announcements is that the Panasonic GH4 is still selling well with deals on packages getting better by the day as the GH5 introduction gets closer. If you were waiting for a buying opportunity, this is it! We will update you on more GH5 information as it becomes available.  -HSC