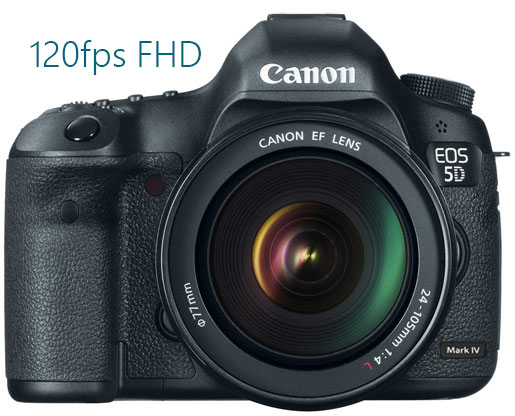 Canon is often accused of being too slow to react and update their line compared to the competition. However when you look back and see cameras like the 7D Mark 1 which introduced 60p 720p video to the EOS line it is much harder to judge them as other cameras topped at 30p.

The 5D Mark III has been a best selling camera for Canon but it is getting long in the tooth.  The lack of 4k video is a sore spot for the camera line that introduced cinematic looking footage to the masses. The upcoming 5D mark IV (4) rumors suggest that not only 4k is in the cards but 1080p 120fps as well.

Canon usually translates features from their high end line of cameras and or from their consumer level cameras to their middle tier.  The EOS 5D Mark 4 video specs could look very similar to what the 1Dx Mark II showed us when introduced this past February 2016.

As you can see the 1DX Mark II has 120fps 1080p video but also 4k at up to 60p.   We don’t expect 4k 60p to be inside the 5D Mark 4 as differentiating the line based on pricing vs features is very important for Canon.  That said here is hat we think the 5D Mark 4 video specs will look like:

So the only big change we see is the lack of 4k at 60p.  THe 5D Mark IV (4) should also have Dual Pixel CMOS AF like the 1DX Mark II and Canon 80D to be able to track in real time subjects and allow for organic focus changes while recording. The video below from the 1DX Mark II will give you an indication of the expected quality from the EOs 5D Mark IV when it comes to slow motion 120fps video.

One thing we are not fans of is the bloated Codec Canon is using for 4k as 500mbps at 30p is 5x the storage size as the Sony or Panasonic competitors with not necessarily a superior codec in itself.   Canon needs to overhaul their Photo JPEG codec used in 4k to an H.264 or H.265 video file to be less wasteful.   Photo JPEG produces a very good 8 bit image with very few if any artifacts at those bit-rates but the modern codecs allow for very intelligent use of bits that create similar quality files with less than 1/5th the data rate.

It is encouraging for Canon to move to 120fps at 1080p which will probably also migrate to the 7D Mark III and Rebel camera line at some point in the future.   With these specs the EOS 5D Mark 4 should be a very popular camera especially if they have applied their improved sensor technology and the expansion of dynamic range and cleaner low ISO files which has caused great praise from photographers using the EOS 80D.

Disclaimer: As with any rumored specs and camera rumors in general, all information could change at the time of release. We do not claim to know or have an official spec list for the camera. The information on this post is based on our best guess concerning the pace of technology progress or innovation  done by Canon in their line of cameras.

You can read more rumors about the camera at sites like Canon Rumors.com Here!