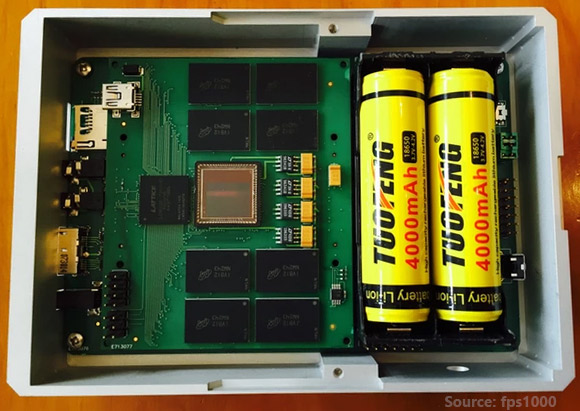 It has been a little bit over a month since the last update of the fps1000 was posted. This time around it is all about the electronics and how they fit into the aluminum case and the first look at how it all fits in a tight package.

For the first time we get a glimpse other than CAD renderings of what the camera looks like when it is enclosed; we also get a look at the big touch 5″ LCD on the back being fitted with a recessed  beveled edge.   The camera will mainly be operated by a touch interface on the back of the screen. 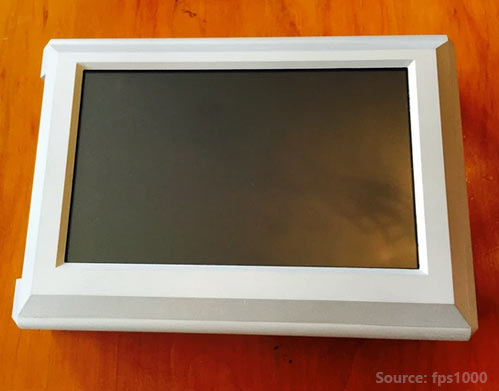 There have been changes from the last update regarding the initial cameras to be built with small sensors ie. Silver, Gold and Platinum lower end models.  The main change is the mount, gone is the micro four thirds unified mount for all models and now it has been replaced on these small sensor area cameras with the originally intended C mount which is screw based.

While disappointment was the initial thought of many of us that follow the project it makes a lot of sense for these smaller sensor variants of the camera to skip on the MFT mount and avoid unneeded complexity.    The C mount is full of benefits like availability of cheap lenses directly produced for C mount with large apertures for low prices and there are adapters readily available on the market for Canon EF, FD, Nikon F Mount, Minolta, Pentax and other brands.  You will not be limited to lens choices.  If you planned on using MFT lenses only a very tiny amount of them from third party manufacturers are not electronic and it is a very limited market for a mount that was going to be without power or communication in the first place.    So you are better of with a C Mount in the lower end models.

At the same time the larger sensor 4/3 Platinum Hex and the Platinum 4k at APS C size will need a Micro 4/3 mount in order to avoid vignetting.  A small C mount port is going to cut off the light entering the sensor so it will need a larger opening like that on a Micro 4/3 mount.    We surely hope that either a Micro 4/3 mount or a Sony E mount will be chosen as it will give the maximum flexibility for lenses with all sort of adapters. We recommend to avoid the Nikon F mount and Canon EF in the platinum cameras as it will restrict heavily the kinds of lenses that can be adapter. The Micro 4/3 mount has a C mount adapter available as-well so it is a win win.  The flange distance for Micro 4/3 sensors/cameras will have to be respected at 19.25mm.

Camera mount flange distance from front of mount to sensor:

From teh above table you can clearly see how limiting the Canon EF and Nikon F mounts are due to the flange distance being so high. This is a legacy distance to incorporate the reflex mirror and should be avoided in our view in order to provide the most flexibility towards lens options for the fps1000 or other cameras. 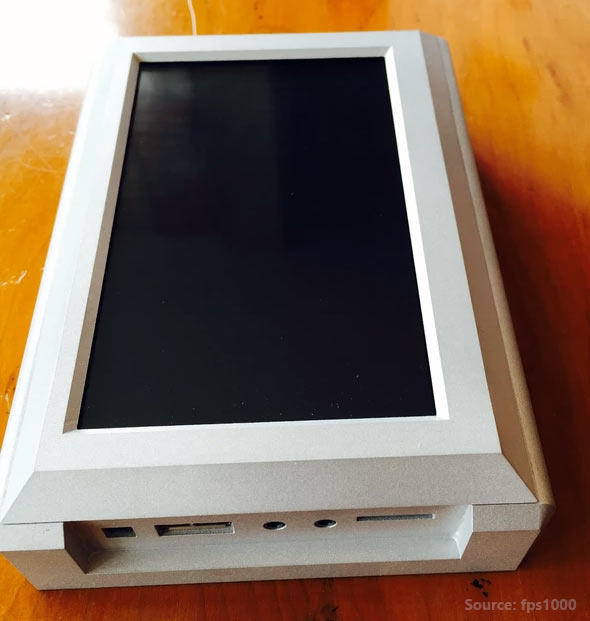 The final image shows the LCD screen with the bevel edge recess space for protection and the ports on the side for triggers, USB connector and what looks to be a micro SD card slot.  Micro SD is a good format but we would rather have a full SD slot for any camera. Micro SD cards tend to get lost easily and are not as robust in terms of build quality and speed.

There is another change happening within the camera that was brought on by testing the hardware. Besides having the boards corrected for some issues which needed a fix, the camera in these lower end models will only use a single battery cell instead of two. The reason being the camera was getting hot during operation from the cell heat build up. The lower end models will work just fine with one cell even when there will still be two slots present.   The slots are being left the same for the higher end Platinum models that will come in the near future. The Platinum Hex and 4k will need the use of two cells because they will use more power for the larger sensor and extra flash memory arrays.

By removing the second battery on the lower end models you have a cooler camera but it will be nice to have the slot either taped or disabled by a cover in these models in order to avoid confusion when inserting fresh cells.   Furthermore other comments on the update ask for some kind of seal of foam or rubber that will shield the sensor space from the camera battery door in order to avoid dust build up.   We feel some non conductive material will help with sealing in this case by creating a wall between the exterior exposure when opening the battery door and the sensor package.

In many cameras the dust problem is well managed by clever solutions like sealing from the rest of the body and cleaning hyper sonic vibration mechanisms along with electronically charged materials around the sensor to attract dust and fibers in the air.   Dust is a real problem and one that should be mitigated by any sort of sealing that will not interfere with cooling.

There is also an indication in Graham Rowan’s comments that the aluminum case will be anodized in a color “possibly red” to protect it from scratches and the elements.  As for the red color we are not sure, it looks good on consumer electronics but we feel maybe purple or deep blue would be a better fit for a camera that you may need to be inconspicuous in some shooting situations.  This is only our opinion.

Tripod Mount?  There will be a tripod mount on the final case, which seems not to be incorporated into this pre-production case at this time.

Regarding the Platinum Hex and 4k models having a different mount and extra cooling remains hidden information for now but that should change in the near future.

One thing that wasn’t shown is the low-pass filter in these pictures, we assume as this is a pre production model that it hasn’t been incorporated yet.  This should also be clarified in further updates down the line.

The good news is that the camera is progressing and it is getting closer to shipment. Any update that gets closer to shipping to backers is welcomed and this one is the most significant to date. This puts the camera in the real world and not just in the lab.

A sample video of the camera should be available soon according to the update which you can read here as a backer on Kickstarter.  We’ll keep you posted for this and other info.

Disclaimer: We are not affiliated in any way financial or otherwise with the fps1000 camera. We are just reporting publicly available information on it’s development. All inquiries on the camera should be made directly to Graham Rowan the creator of the project at fps1000.