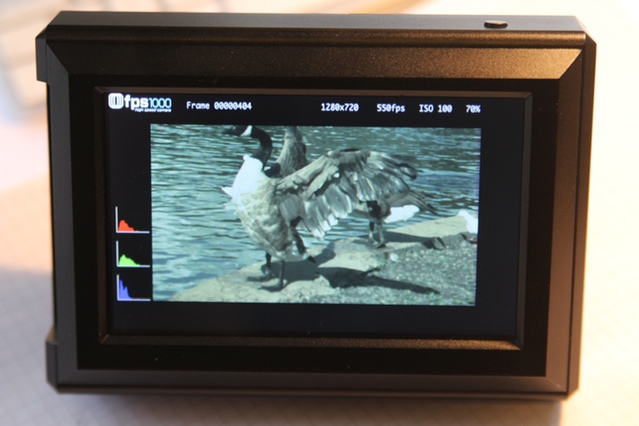 The latest fps1000 update has something that buyers of the Kickstarter project have been waiting for months; this wait is over and we can now finally see the first images of the new camera iteration with a turned on screen and included 50mm C lens for C mount models.  What is clear is that the little camera has evolved into a real and tangible piece of gear with a lot of features apparent in the initial software release.

All images Courtesy of fps1000 and Graham Rowan!

You can clearly see the three color RGB histogram on the left and frame counter, frame rate, ISO value and what seems to be a Battery % value on the right hand side.

The front pat is now also visible with a 50mm C mount lens attached which is included with the fps1000 cameras “At least the C mount models”.  Even the 4k m43 chassis will be able to use C mount lenses with adapters however vignetting could be a problem by the imaging circle on the lens. This C mount camera is the scre on type and will accept any of the thousands of C mount lenses available and Graham Rowan shows one of them found on eBay in the next shot! 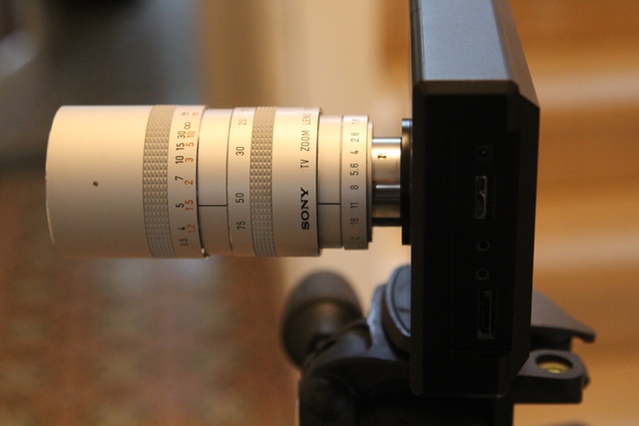 The camera is also sporting a 1/4 inch tripod screw mount and as you can see the whole thing is very portable and compact. 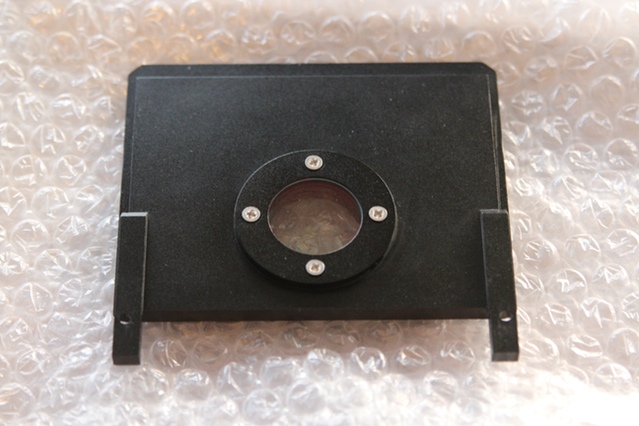 The fps1000 IR cut filter can be seen “Transparent Slab” on the back of the mount design and is placed firmly with easily removable screws. If you need your camera to be IR less for any reason if yours has it it will be easy to modify.  This is a major plus for those wanting IR light spectrum in their image capture.

It is clear the fps1000 camera is nearing the production and shipping stage and it is quite an amazing site to finally see this project come to fruition. For non believers and believers alike, it has been mostly speculation as to the viability of the whole project until now. It is clear that Graham Rowan has put in extreme effort and technical know how to get these cameras built and it seems it has been well worth it.  The usability and footprint of the camera will be second to none in the high speed market with a lot of flexibility.

You can see a single button in the top right hand side which we estimate will be the On/Off toggle and could actually trigger a camera recording event. This will also be possible with the touch screen and or a handheld remote trigger controller.

Here is a transcript of the update itself so you can read about it:

By Graham Rowan, Creator of the fps1000:

“There has been a lot of progress since the last update. I’ve had the finished camera working for several weeks and have been busy adding software features. Most of the teething problems have been sorted out. There are so many fine details to take care of before the product can be production ready. I know that I can provide software updates as new features are added but I want to make sure that the basic functionality is in place and the camera is easy to use to minimise time spent in support.

I took time out today to take the camera on a shoot at one of my favourite places – the park.

Putting these shots together takes a long time and I would like to do more of them. But I’m also reluctant to take time away from development. I would have liked to have taken some videos but this would have taken a lot longer.

I think the pictures speak for themselves. You can see some of the features that have been implemented such as histograms to show exposure levels, the information display to show frame rate, iso level etc.

You can also see the details of how the filter is fitted – this turned out to be a lot simpler than I thought and can easily be removed. The decision to go with a C mount is turning out to be a good one. The basic lens that ships with the camera is actually very good even though it is very low cost. It is an f1.4 50mm lens and suitable for many applications.

I’ve also been shopping around for other C mount lenses – there is always a good selection on eBay. You can see in the photos my favourite lens – it has 12.5-75 zoom and f1.8 aperture. This is an incredibly versatile lens and I bought it for about £50.

You can also see the camera mounted on a standard tripod with the 1/4″-20 mounting thread.

Battery life for a typical session is turning out to be about 2 hours.

Some of you have been asking about shipment dates. I try to answer every message and email individually. When I am asked this question I naturally try to come up with an answer. The truth is, however, that I cannot give a definitive date. The camera has made steady, continuous progress with no real problems. I have made several iterations of the motherboard and sensor board which has fixed minor problems along the way. The camera now is in pretty much its final form – I don’t envisage any more iterations. However, until I can answer the question “is it ready to ship?” with a definitive “yes” I cannot predict exactly when this will be. That’s the honest answer.

If it’s any consolation the camera has been updated in line with new developments in the market. I know much more now about market requirements thanks to a steep learning curve and valuable feedback from you all. I am extremely pleased with the way things have turned out.

Thank you all for your continued patience. I am spending all my available time getting this product to market. Hopefully we’re not far away now.”

HSC: The project is nearing the final stages before shipping and looks to be an outstanding set of features right off the bat.  It will be a matter of testing cameras in the wild to measure actual imaging performance, low light capabilities and frame rates in order to fully evaluate the hardware. However now there is a physical product that once finalized could be copied and mass produced for shipping. It has been a long wait for many of the backers that believed in the project since the start but that wait is coming to an end.  These cameras might change the high speed world as we know it and will be a short time to be exposed to their capabilities and if they are a true disruption in the high speed marketplace.

While it is still not completely ready, we are in full support of delaying the ship date until core features and functionality are rock solid. It could be a couple of months or maybe a little more but all owners will be better for it by having a fully workable product right out of the box without troubleshooting hassles.  Other features will come with firmware updates in the future!

Thanks to Graham rowan for the images and continued information for the project!

For ordering an fps1000 camera see the following link: