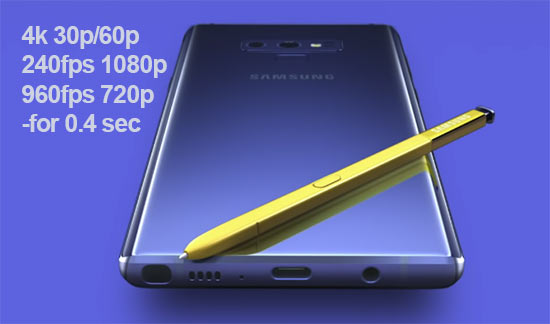 Samsung has released the Galaxy Note 9 today and needless to say its a spec powerhouse with a familiar design and feel. No other Samsung has ever sported such amount of features and memory footprint up to 1TB with the 512GB internal plus an optional 512GB Micro SD card.  Of course, a fully specced out phone will not be cheap when the handset starts at $1,000 USD in the USA or €1,000 in Europe.

Our interest and focus are the video features and we are far from disappointed.  You get improved AF with scene recognition and an increase in dynamic range compared to the Galaxy S9.  You get 4k UHD up to 60p and the usual competitive frame rates of 240fps and 120fps Full HD plus the 960fps mode that made its debut in the S9 and S9 plus phones earlier in the year. The extra checkmark in this phone’s sheet is that the slow motion at 960fps is now double the rec time of the S9 at 0.4sec instead of the 0.2sec in the S9 at the full frame rate.

So digging in the specs it is clear Samsung is able to harness the extended DDR memory to record an extra 0.2sec for a total of 0.4sec at 960fps 720p quality which is twice that of the Samsung king the Galaxy S9 and S9+.

Many will point out that the S9 and S9 Plus are now able to also shoot 0.4sec with a firmware update but if you look closely that will only be at 480fps and not 960fps.   It is unclear at this time if the Note 9 will be able to shoot up to 0.8sec at 480fps while doing 960fps for 0.4sec.   This is now the Samsung king of slow motion.  Looking at early samples which are really not ready for sharing due to quality concerns and also the fact that the web is inundated by fakes we will refrain from sharing any slow motion samples of the Note 9 until real reviews of the feature start to come out.

(*)While the 480fps modes have not been confirmed or are listed in the specs it could become a possible spec like it was shown in the Galaxy S9 and S9+ firmware update.  Considering the Note 9 has double the capability at 960fps it should be entirely possible to offer 480fps at these longer rec times.  No official spec exists listing these modes.

So there you have it, it could be the best slow motion phone of the year regarding frame rates. The OnePlus 6 is still winning in that it can shoot an entire minute worth of 480p played back at 30p which is amazing.  We still have to see what Apple has to show at the iPhone refresh reveal later this month. We will share Galaxy Note 9 slow motion samples as they become available.

Thanks for reading and your continued support-HSC