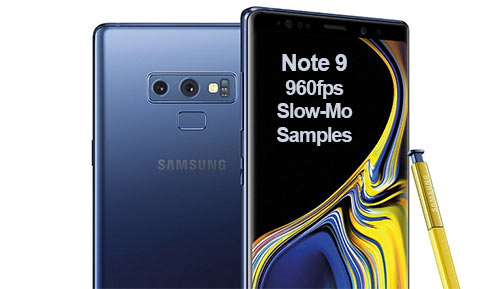 Now that a few days have passed we now have the first few samples of what the Galaxy Note 9 is capable of in 960fps slow-motion mode. It shows about the same effective resolution as the Galaxy S9 and S9+ which share the same camera system.  The Note 9 is supposed to increase the dynamic range but it is unclear how much benefit it will show in a resolution starved 720p high-speed mode.

The best selling factor for the Note 9 as a slow-motion device is the doubling of recording time to 0.4 seconds from the 0.2sec available on the Galaxy S9. This transforms into a 12.8-second video played back at NTSC 30p which makes it much more enjoyable than the 6.4 sec on the other Samsung phone.

All in all it looks like at first glance to be a great alternative to other 960fps capable phones and while the price of the Note 9 starting at US $999 should put off plenty of buyers, in a few months it should become a sub $800 device which on a payment plan it doesn’t hurt too much. If however, you want to have more control over slow motion then getting a higher frame rate capable camera like a Sony RX series for about the same price is a better bet overall bet.  We will have more samples of the Note 9’s slow motion in a few weeks as more and more users get to play with the feature. Thanks for your visit -HSC