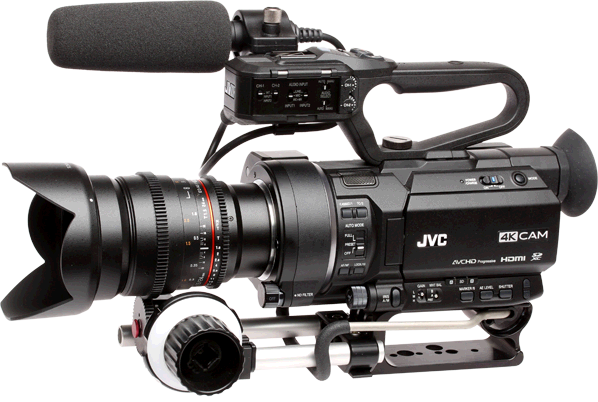 What came as sort of a surprise and some mitigated anger to current  recent owners of the camera, JVC announced that the JVC GY-LS300 4k, HD and SD capable camcorder will now be offered at $1,000 USD cheaper from a MSRP of $3,995 to $2,995. Furthermore it has a few new features added in a free firmware upgrade to current and new owners of the camera in April.

The update brings full HD 120fps capability to an already robust camera along with “JVC Log Gamma” recording mode.  The camera offers a Micro 4/3 mount for easy use of different lens mounts including Canon and Nikkor lenses which is a big strength of this setup.  Hundreds of adapted lenses can be used from almost any manufacturer.  The JVC Log mode is supposed to increase dynamic range by 800%. We find that claim a  little on the superlative side and probably will bring 2-3 real stops improvement in DR.

The rebate of $1,000 off will expire March 31st 2016 and is only offered through authorized JVC resellers like Amazon.com Here– Link and or Adorama Here-Link!

The firmware update will be available in April this year. The full press release from JVC below:

The technology also drives the Prime Zoom feature, which allows shooters using fixed-focal (prime) lenses to zoom in and out without losing resolution or depth of field. Other features include the “JVC Log” gamma setting, which expands dynamic range by 800 percent with film-like latitude, and a built-in HD streaming engine with Wi-Fi and 4G LTE connectivity for live transmission to hardware decoders or content delivery networks (CDNs). The camera records 4K, HD, and SD footage in a variety of formats to dual SDHC/SDXC card slots.

The $1,000 instant rebate is valid only on new GY-LS300 camcorders purchased from an authorized JVC Professional Video Products dealer through March 31, 2016. The GY-LS300 is also eligible for a three-year extended parts and labor warranty. For more details, visit pro.jvc.com.”