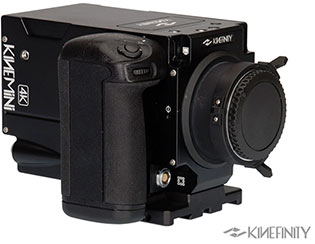 Kinefinity a relatively new company that specializes in digital cinema cameras is about to release to customers the KINEMAX 6k capable camera.   At first glance it looks like a RED Epic clone as the body and design aesthetics suggest however their technology is in house and their prices are much more accessible.  The company is based in Beijing China and two of their cameras now offer high quality slow motion modes.

HSC: For a little over 4k US, you can build a RAW capable up to 120fps slow motion camera with the use of the full S35 sized sensor and no cropping and continuously.  You get an electronic EF mount and 14 stops of latitude.  Quite a deal. You will need to record to SSD Drives as the data rates are enormous.

The KineMAX 6k is all about resolution and competing head to head with the RED EPIC Dragon camera.  It is their response to a growing resolution war that promotes more pixels while maintaining a large dynamic range.

HSC: For under 10k US, you can build a RAW capable up to 144fps slow motion camera with a 4k crop and record continuously.  You get an electronic EF mount and 14 stops of latitude.  You will need to record to SSD Drives as the data rates are enormous.

While the company is based in China they have a European office and presented at NAB 2015; are shipping cameras worldwide with many clients in production houses.  We consider it a viable option if you need very high quality slow motion with RAW capability. While the frame rates top out at 144fps it is still a good option for the money.  Be aware that these cameras produce cinema quality results which rival the best in the market. For more information visit: http://www.kinefinity.com/

No Film School Visits the Kinefinity booth at NAB 2015: