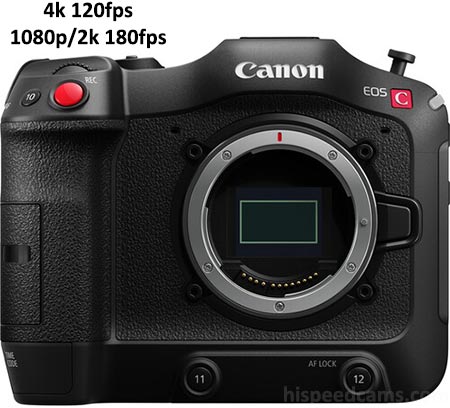 Things that could be improved:

The camera does have some holes in the spec sheet that many could find objectionable.

There is image stabilization on lenses that support it but In-body stabilization is only software-based and not actually stabilizing the sensor as with most other recent cameras.  So no IBIS could be a deal-breaker for people expecting several extra stops of shake reduction.

The form factor of the C70 is smaller than other Canon Cinema cameras but it is not exactly tiny compared to other EVIL cameras out there like the Sony a7s Mark III or the Panasonic S1H or S5.   You do not have a viewfinder available unless you add one as a third party attachment which may prove to be indispensable. Canon might at some point create a viewfinder product for this camera line but now that is an extra cost to be factored in if you need one.

The Slow motion at 1080p/2k at 180fps looks soft from the samples we have seen, very reminiscent of upscaling and line-skipping done on other cameras.   We hope the sharpness/detail quality improves in future firmware but it could be a sensor limitation.

The price seems to be a little hefty for a camera that does not shoot in RAW of any kind, still, we believe considering the package and image quality produced to be an acceptable range.

The still images that can be captured by the camera are from what we fount to be only JPEG with very good quality. It will be interesting to see if RAW images can be saved and used in this mode. The camera however is geared primarily for video with Photo mode probably saved for timelapse and hyper-lapse video capture options.

Still in the early days:

We love what Canon has done here, finally a camera that creates real excitement by providing a formfactor and inventing a new segment that bridges the gap between DSLRs and larger cinema cameras. It is a godsend of a camera for anyone wanting to get more professional with their video capture and being able to command presence in a paid video shoot with a professional and dependable tool that has large batteries, dual SD Cards for nearly unlimited recording if swapped, and image quality that rivals the best out there.

On the other hand, it does not offer RAW capture like RED’s REDCODE RAW or Black Magic Design’s BRAW which is especially important for productions that need extreme image adjustment.

The Canon C70 is more a camera that creates silky smooth images with real 16+ Dynamic range progression that will hardly blow a sky end even let you shoot in sunny conditions with the aid of the built-in ND Filters. It is a camera that will not disappoint on set and will generate beautiful footage that will stand the test of time without a lot of processing.

The Canon C70 slow motion at 4k 120p is excellent and could be used without problem on a paid shoot, the 1080p/2k quality is soft and we simply cannot recommend it for that format. You are better off converting 4k 120p to 180fps with software later on and avoid the Super 16 soft images at the lower resolution.

We are still looking for more 2k and 1080p 180fps footage to make a final verdict, but from what we have seen so far, that feature is best saved only for situations where you absolutely need it.

We really cannot find a camera out there that offers so much for certain segments of the video world, anything from weddings, music videos to documentaries or short films, the C70 could be the camera you were waiting for over a decade. Canon seems to have woken up and we now expect Panasonic and Sony to hit back with products that will land somewhere in the range of the C70, if Panasonic could offer a 240fps or even 480fps mode at reduced resolution in such a camera, they could become a favorite of HSC and high frame rate enthusiasts.

We will have more on the C70 slow motion mode in the coming months as more samples show up. In the meantime, if you plan to order the C70 or any other camera, please use our links so you help our website at no added cost to you.   Thank you for your continued support – HSC