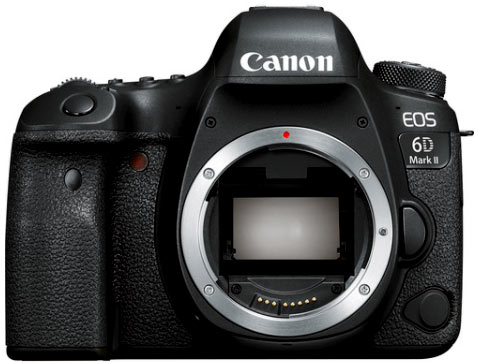 Nearly 5 years after the original 6D Mark 1 camera was released, Canon has now unveiled the EOS 6D Mark II which is a big update from that camera when it comes to a new vari-angle LCD touch screen, AF points now 45 all cross type vs the old one at 11 with only 1 center cross type, Wireless support, dual pixel video AF and an extra 6MP for a total of 26MP vs 20.1 on the Mark 1.

This camera is still the cheapest full frame camera on the Canon line up and it gets a lot right but also 4 things are left out that really miss the mark which will not sit well with people looking at competitive options.  The camera is a great picture shooter for sure but it feels crippled artificially and it is quite behind the times when it comes to video specs.

As you can see the camera is a real powerhouse for photographers and 1080p shooters that want full frame but also want a cheaper body under $2k USD.   There is a lot to like here if this camera was released 5 years ago it would have been cutting edge and would have really been a darling with most user segments.

Forward 5 years and the camera is simply missing a lot when it comes to video. These are what we feel the sore spots that Canon needed to address with the camera but decided not to allow the features for whatever reason. Many say it is to not cannibalize their higher priced cameras and Cinema EOS line but that is already happening by the adoption of other brands by users that cannot find the video modes on Canon.

We have seen this movie before. The 5D Mark IV, for example, missed the mark with 4k video with a terrible crop factor and to add insult to injury the codec for recording video is Photo JPEG which is good in quality but insanely huge for 4k. Canon needs to get H.264 and or H.265 as a codec for their DSLRs. This is getting long in the tooth.  Videographers have opted for Panasonic GH4, GH5 and or Sony a7s I & II cameras instead of Canon or Nikon for their video needs. Nikon is selling less and less cameras and Canon as well.

Seems they are not interested in innovating their way out of the hole and fight against Panasonic and Sony for camera enthusiast dollars.

What Canon needs to do in our view:

We feel that if Canon did all of the above they would only be competitive with the current crop of cameras. They will still have to create new features that will set the cameras apart. Their dual pixel AF technology is the best in the business and it is really the best argument for getting an EOS DSLR instead of a mirrorless camera.

There has been a lot of disappointment from Canon fans and people expecting Canon to really bring the full frame lower cost cameras to the competitive forefront.

We cannot list the 6D Mark II in our camera guide as the slow motion feature in both 720p and 1080p max out at 60fps.  Our cut off is 120fps.  Hopefully, Canon will release something exciting that will really get our hopes up. The Vari-angle screen is a must and we are glad it finally made the rounds to the full frame DSLR line. We think you are better off with a Panasonic Lumix GH5 for the same price and a boatload of features including 180fps continuous Full HD shooting.

The videos below will discuss most of the stuff listed above and will show a few more things.   We encourage you to watch a few of them to get more information on the 6D Mark II.  So close yet so far!

Enjoy the 4th of July Weekend!

My Thoughts – Canon 6D Mark 2 (too many deal breakers?) by PhotoRec TV:

WHAT ON EARTH is wrong with CANON? 6D Mark II by Theoria Apophasis: