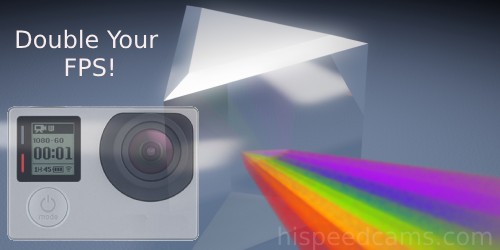 Ever wondered how super slow motion in the past was capable of multi-thousand fps performance with just film exposures? Well, they used customized camera rigs that combined multiple rolls of films, mirrors, and synch cables to essentially get a result beyond what the limitations of the equipment forced upon the shooter.

In a very cool video by Camera Tech on Youtube from 2015 they were able to get a custom mirror rig to shoot simultaneously on two GoPro cameras with a semi-translucent angled mirror that splits the light to each camera lens by 50% making it possible to sum both frame rates in post by alternating the frames captured by both cameras with a very slight time difference equivalent to 1/frame rate expected.

Wait… so you need two cameras?

Well as with most anything in this world this technique is also not for free. You will need an identical camera and the beam splitter rig to get the frame rate results doubled.

You will also lose 50% of the light as the light gathering is halved by the split image. This means you will need twice the light to get the same brightness with a single camera. For lower frame rates below 10,000 fps it will be fine on a sunny day but for indoor studio shoots, you will need to get a light setup with twice the power.

What about that awful Flickering?

Well, the fact that the exposure on these GoPro cameras is not exactly the same as these are not in perfect synch you end up with flickering that kind of destroys the video quality.

We explored how to fix flickering in slow motion on our article series here which has several methods of getting rid of the flicker effect.  Once you apply these methods, especially Flicker Free, you will get a smooth and solid video result.

Should I do it?

It depends on your gear. You need two identical cameras and lenses if you have an interchangeable lens camera ILC. With GoPro’s it is relatively cheap but with higher-end cameras, it becomes a big deal proposition plus you need to build the beam splitter rig or farm it out to a shop and of course, you need double the light if you are using studio lights as the Sun is free.

Once you have it set up you still have to use video editing software that can get you into the frame by frame editing mode which will also cost you some extra cash.

If you are a pro and need to have your camera deliver twice the slow motion frame rate it currently does it really makes some sense to try this as super slow motion cameras that shoot Full HD and or 4k are prohibitively expensive.  For example, you could use your current Panasonic GH5 camera MSRP $1,499 that shoots 60fps 4k to shoot essentially 120fps 4k which is pretty awesome. That camera also has a 180fps Full HD mode which would translate to 360fps which is very nice indeed.

All in all, it is a technique that could be a great scientific project and a cool way to upgrade your frame rate on any camera platform.  If you get to build such rig, please share it on the comments below we would love to see the results! -HSC