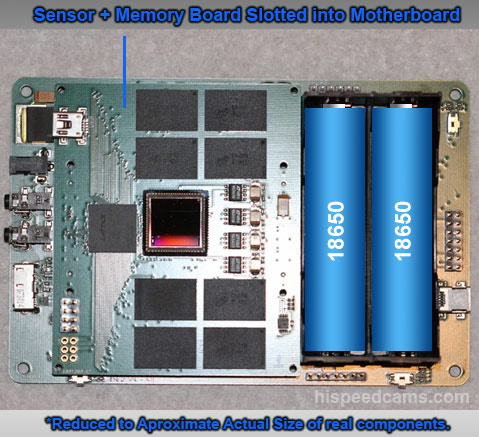 The development of the fps1000 high speed camera is heating up and it is advancing quickly and surprisingly well.  The design was changed from a single board to two boards; with a logic and ports DSP processor and LCD controller on the Motherboard and a smaller sensor and memory combination daughterboard.

All the motherboard components for all the cameras “gold, silver, Platinum and 4k versions will be the same” This simplifies the design and testing/troubleshooting is reduced as only a single version of this board exists.

However since every camera uses different memory and sensor combinations this board is independent but slots into the motherboard perfectly and according to the latest update it is so thrifty with space that is just leaves a 5mm gap between them. Which should be ideal to make the camera work with it’s small footprint. 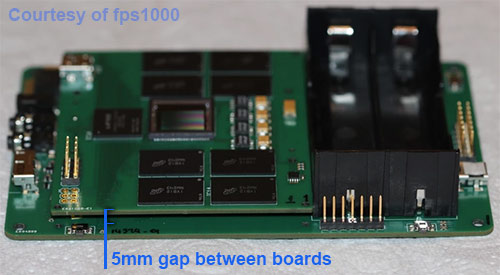 It is amazing how reduced the final camera will be. The batteries are the real real estate compromise where the grip will probably be located.

“The new DSP is mounted underneath the motherboard. I’m afraid I’m keeping this under wraps for a little longer to keep the competition at bay! It’s going to make a big difference to the performance and available functions of the new camera.

As development progresses I am having to make minor changes to the design to make sure that it gets into production as soon as possible but without compromising the fundamental design goals. As a result of this there are two changes to the feature set of the camera. Firstly, I have decided to drop the HDMI output. This was not part of the original stretch goals but was added into the new design as a nice to have. Although it does not involve too much extra hardware it would mean a considerable delay in delivering the finished camera because of the extra software and testing. I want to keep things as simple as possible and it is not of fundamental importance to most users so I’m afraid it had to go.

HSC:  While some people will lament the departure of the HDMI port for monitoring, it was also an added at the last minute port that strayed away from the design. Adding it would add unnecessary delays and spec compliance testing that the camera could do without. If the cameras ship much earlier because of this then it was a good decision to drop it.  The back screen which has been increased to a 5” screen with 800 x 480 resolution should be more than good enough for monitoring and focus checking.

Secondly I have had a long think about the hardware architecture from a processing point of view. When I made the design modifications I wanted to add some serious processing muscle to allow me to add lots of nice features to make the camera more usable. This includes features such as focus assist and fast image compression. There are lots of other ideas that I plan with regular software updates. This is the reason I have included a DSP processor. I spent a lot of time selecting a processor. It had to satisfy a number of important requirements:

I’m very happy with the choice I’ve made – more details will be revealed in a future update.

At this point I was left with a fast DSP processor that had access to all of the on-board hardware in a streamlined architecture plus the ARM cpu that was largely redundant. The only sensible thing to do from a design perspective was to drop the ARM processor. It really is no longer needed. I know this will disappoint some of you that plan to write software for the board. However, you will still be able to develop software for the DSP processor. I still aim to make the architecture open for user-programmability. The development software and languages available for the DSP processor are similar to those available for ARM processors. And you will have much more powerful hardware under your control.

If the change in processor strategy does affect you and you want to discuss this further then please message me and I can discuss it with you.

HSC: The change to a DSP Digital Signal Processor is something many will have mixed reactions to. But you have to look at it as a change intended for an imaging device that needs to have speed and quality of signal as paramount. The ARM processor can be programmed to do anything but as a general CPU it can be several orders of magnitude slower than a DSP that has been optimized for a specific task.  Using the DSP you can accelerate the camera to focus and do tracking and other amazing things in real time including adding imaging instructions that decrease the signal noise and work on accuracy and fidelity.  Programability will still be possible but in a somewhat more constrained fashion. However a DSP today is so featured that using it should only be a positive for the camera.  Will frame rates be impacted upwards by this move? it remains to be seen as the sensor and memory bandwidth is a large factor in that equation.  Whatever the case having a DSP and a very powerful one at that could make the camera leap to new heights in speed and usability. 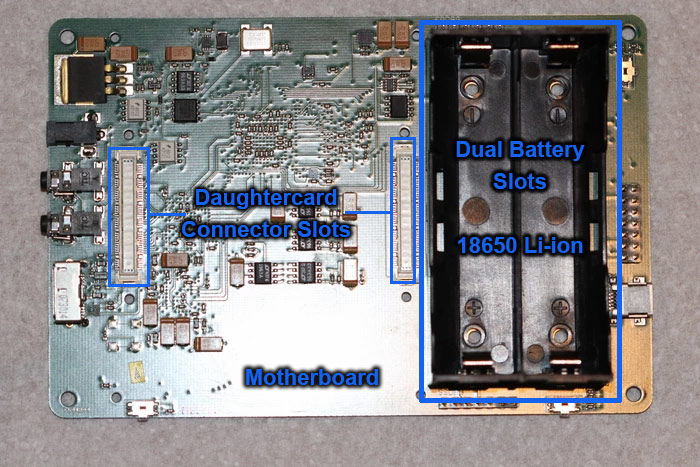 Although I received the boards only yesterday I’ve already done some basic testing. Firstly they passed the smoke test (literally, the first test of new hardware is to switch it on and see if any components go up in smoke!). All the power supplies are basically working and I was able to plug a sensor board on top (thankfully the connectors lined up!) and power it for the first time from its own battery. I also plugged in the LCD display which powered up fine. Encouraging first steps.

HSC: We are very glad the initial turn on process has gone without issues. This makes a huge leap in time for development. While a lot more tests remain this speaks to the technical know how of Graham Rowan as a single iteration electronics wiz!

The Sensor board has been on the test bench for just over a week and it is gradually coming to life. So far no problems have been found and the board is producing some nice images. There is a lot more to test so fingers crossed. Well over 50% of the board has been exercised so far.

One pleasant surprise I had as the board sprang into life was how much more sensitive it seemed to be to low level lighting conditions. This prompted me to check the new data sheet and sure enough the new sensors are almost twice as sensitive to light as the older range across the board!

Sincerest thanks again to all of you for your kind messages and continued support. Together we are making history.”

HSC: This is an unexpected positive surprise.  Low light performance is a very big issue with high speed capture as you need several orders of magnitude more light than capturing at regular frame rates.  Almost double the sensitivity will catapult the camera forward and save a lot in lighting equipment for a shoot.  It will be a matter of checking the final output to see what the performance is but this is quite encouraging!

The camera is progressing rapidly and while we still have no extra imagery produced by the camera, that should come once the camera testing has moved into Alpha.  Right now it is all about component testing and looking at the redesigned boards performing to spec and see if the power supply from the batteries is working at all frame rates.

Frankly there is a kind of aura of wonderment to be able to see the birth of such a camera in a behind the scenes environment that a Kickstarter project provides.  All things considered it seems the camera in the gold and silver versions might be shipping in May or June with a  pretty solid capture mode. We are unsure when the rest of the cameras like the Platinum and it’s upgrade will be ready to ship but we expect them a little bit later than the simpler models.

We’ll keep you posted on all the fps1000 developments here at HSC. Thanks for your support, it makes a huge difference to us!

if you missed the Kickstarter project, you can still pre-order an fps1000 camera by following this link:  https://fps1000.backerkit.com/hosted_preorders

Disclaimer: HSC is not affiliated in any way with fps1000 and is not responsible for delivery, performance or any other aspect of the camera. We are expecting a Platinum camera as backers and just report the news and developments in the high speed camera market.