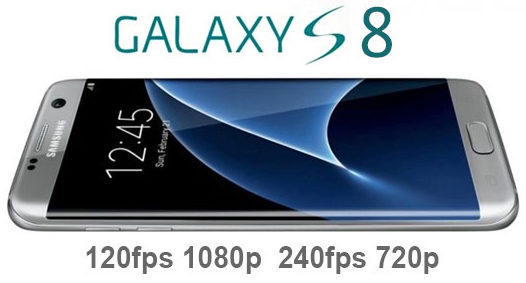 Chief among these new handsets is the Galaxy S8 which should provide a much expected upgrades and new features to the most sold Android phone worldwide.  The spec that interests ups more that anything is the capability of shooting ever faster frame rates at higher resolutions.

As you can see the Samsung Galaxy S8 rumors hint at the 4k 60fps spec for the first time in a smartphone and it will bring 120fps 1080p and 720p 240fps which matches the iPhone 6s, 7 and Google Pixel’s dominance spec. If no other phones increase frame rates the Galaxy S8 will become the most full featured slow motion capable phone when released by April 21st this year.

Rumored Design Leak video below: “Could Be Fake”:

We will have more information on the Galaxy S8 as the release approaches. It is certainly an exciting phone from a slow motion perspective and makes for the first time our list for competitive slow motion sice the specs have finally reached the top tier competitors and exceeded them with 4k 60fps! -HSC