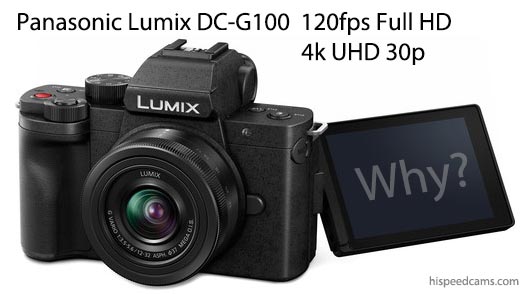 The excellent video above by imaging resource should allow you to see a complete preview of this camera along with the tripod accessory.

We believe that the G100 is a good all-rounder if 1080p is your video target but as a 4k camera there are better options out there. The same goes for slow motion you can get for a similar price an excellent RX100 series from Sony with tons of HFR high frame rate modes including near full HD 240fps and up to 1000fps at lower resolutions.  We suggest you take a look at the cameras listed below instead if you want slow motion. As for Vlogging, we feel the camera to get today is the Sony Z-V1 instead which offers a better AF system, better dynamic range, and frame rates with limited HFR.

Panasonic should implement their new audio solution on newer cameras but also allow more recording time in 4k and frame rate options at all price points. The G100 is a better camera than many others but is not ready to go head to head with other options in its price range like the G95 here. You are better off looking at the competition or other Lumix cameras that have discounts. -HSC