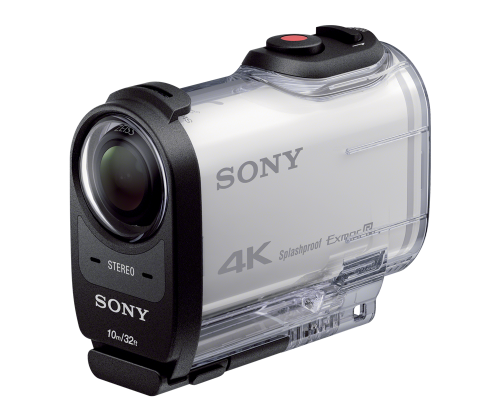 The color is very saturated the low light beats the GoPro easily when it comes to detail. It is still no low light champ but it does offer better performance than the Hero 4 Black.

When it comes to detail overall it could be said that the Sony FDR-X1000V does indeed deliver more resolution or apparent sharpness than the GoPro hero 4 when it comes to 4k and even in slow motion modes.  It is still generating down-scaling artifacts at 1920*1080 at 120p and at 720p 240fps.

MarkHawkCam did an excellent review comparison of the Sony FDR-X1000V  vs the Hero 4 Black:

You can clearly see that the Sony edges out in detail but we still believe the dynamic range retained by the Hero 4 Black is wider than the compression on the Sony. For color grading it is clear the GoPro Hero 4 does indeed win in this respect. The Dynamic range in bright spots and dark spots seems better retained in the GoPro Hero 4 Black, the Sony just cuts out to quickly due to the S curve applied to the video stream.

The Sony Codec at 4k has a 100 Mbps stream for 30p, 25p and 24p but codec bits are not everything if the look is baked in. It is not clear if the codec will have a Pro Tune like or Log like setting that will be ideal for grading.  For the owner that doesn’t want to grade in port there is no question the Sony does deliver a very poppy image.  For graders at first instance it’s disappointing.

1080p 60 is very clean and clearly near artifact free like that of other lower frame rate modes.  The 120p at full HD 1080 doe show line skipping artifacts that the GoPro Hero 4 Black also suffers from. They are however more apparent on the Sony as the Moire and aliasing is increased visually due to the detail gain and the sharpening applied to the Sony footage in Camera.   The GoPro Pro tune is soft on purpose and hides the artifacts better. Neither camera is clean when it comes to aliasing or Moire in 120p or 240p modes.

240p is unforgiving on both cameras and while the Sony does a decent job, it won’t win any prizes for detail, compression or low light performance in this mode. However the Sony does show more sharpness still.  It can be attributed to either better optics a better sensor or better image processing algorithms. We believe the Gopro Pro Tune will still be ideal for grading and image editing but we can’t help but give the edge to the Sony for slow motion.  The image quality is simply visually more detailed.  Just be sure to check your shots for Moire & Aliasing artifacts which the Sony is handing out in droves due to the extra sharpness.  This is however not professional quality slow motion in either 120p or 240p for that you need an Sony FS700, edgertronic or Sony FS7.  For an action camera however the slow motion performance is in the top spot for now.

If you need steadyshot, no fiddling in post with the image quality and a tad sharper camera the Sony FDR-X1000V is the action camera for you.  Underwater the GoPro housing is better for image quality and it also has the housing included which the Sony charges extra for.

If you need Protune and the ability to retain more dynamic range and add your sharpness in post while getting even more frame rate options like 2.7k at 60p then the GoPro is your top dog.

The cameras are very close but pixel by pixel the Sony just has more detail which could be the most important factor.  GoPro has a large installed base and the codec is very flat if you want to tinker. If you already have a Hero 4 there is nothing to worry the camera is excellent but It’s kind of a toss up if you are a new owner,  the Sony is the current image quality champ for action cameras, by a small amount however it is more expensive and you will need the underwater housing to submerge it the Sony is not as price friendly!

More video of the Sony vs Hero 4: