The Chronos 1.4 high speed camera is chugging along in it’s production process to backers of the project and also now to purchases outside the project which you can find here.  There is a lot of info on the update that you will find interesting including the pictures that show parts of the machined case.

We will receive a Chronos 1.4 Color camera if production continues at this pace by March this year. We will then review the image quality and features which will be evolving with continued software updates as the code base matures.  Once the camera is shipping and we can judge the final image quality we can rank it in our camera guide as a direct high speed option for our readers.

Thanks everyone for making the project such a huge success, 915% funded! We’ve just received the payment from Kickstarter, so ordering now kicks into high gear!

We’re taking pre-orders on our website! Since the Kickstarter ended, we’ve gotten 7 more orders. If you get your preorder in before March 1 2017, you will be the first to get a camera in May after all Kickstarter rewards have shipped.

Luxima, our image sensor supplier, has stock for the earlybird batch, and will have no trouble supplying more sensors for the full production batch. The second batch will transition into a new silicon revision, but this won’t affect image quality, and may open up the option for an 11% overclock option in future software.

Most of the smaller parts for both the earlybird and regular batch of cameras have been ordered. The PCBs, which are the longest lead time item, were actually ordered during the campaign. Case samples are currently being machined and should be in before the end of the month for approval.

Here are some pictures of case parts in-process:

We hit a few minor issues so far:

We’ll keep you up to date with more production updates in the future. -David

HSC- David assured us that the  sensor’s 2nd batch will not improve image quality which should be identical to batch 1. The new batch will be on a slightly improved manufacturer process to increase sensor yield/ silicon wafer and not to modify capabilities.  This might yield overclocking performance of around 11% in the new batch but image quality artifacts can creep in when overclocking is used in high speed cameras.

Ghosting is a common artifact that was seen in the overclocked edgertronic SC1 camera during our review. When the cameras are not overclocked; image quality remains unchanged and perfectly clean as they were designed to.  That said David says he is looking into overclocking ability for the first batch of cameras as well as a possibility for future development.  We are not fans of overclocked high speed as the image quality degradation negates frame rate gains for serious image analysis.

As a side note when we first got the Computar 12.5-75mm lens which we had before the Chronos Camera was announced, it was missing some components that we later included by adding some cheap accessories.  Some lenses have the thumb screws and others don’t for example so receive your lens first and order the accessories you are missing after. We have created a post in our Chronos camera forum detailing what we purchased for this lens: Click here for the Computar 12.5-75mm f1.2 Chronos Kit Lens Accessories guide! 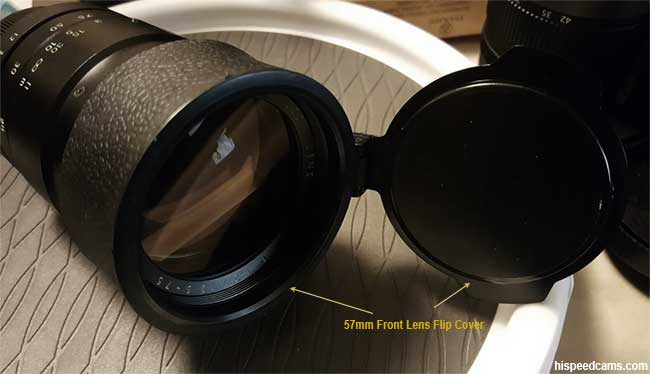 We will keep you informed of the Chronos 1.4 development as information presents itself.

You can get more information about the Chronos 1.4 camera and order one if you so choose at the official website :  http://www.krontech.ca/