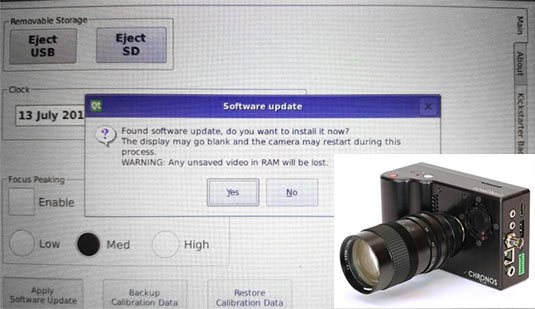 The Chronos 1.4 Camera is getting its first firmware update from 0.1 to 0.2 to add a few feature, correct a few bugs and some interface changes.  The update is recommended for all owners and it is very easy to install. Be sure to have a FAT32 formatted USB stick in order to perform the update as it needs the root directory for file discovery.

We applied the update on our camera and were pleasantly surprised that the actual software update did not need the camera to be turned off after. It seems that the Chronos team is making updates on the internal SD memory and not on a firmware chip which also means you cannot brick the camera by updating. Very cool feature!

Not a huge amount in this one, basically a few features requested by a few scientific users, and a bunch of low-hanging fruit . More major updates will probably have to wait until after the backlog of Kickstarter rewards and store preorders have shipped since it’s so busy leading up to production. Once we hire a software engineer, updates will be much more frequent and significant.

-Boot up the camera and insert the USB stick-Backup your calibration data. Tap “Backup calibration data” and wait for this to complete (about 5 seconds). The cal data is now backed up on the USB drive as cal_[serial number].tar

-A message box should pop up indicating the software update was found. Tap Yes to install the update.

-The screen will go blank for a few seconds, then the updated application will start.

-Done! No need to restart the camera.

What if something goes wrong?
Don’t worry, it’s impossible to brick the camera. If the update fails for some reason and the camera won’t boot, you can reflash the OS SD card yourself to recover the camera. If you need the image file to do this, let us know. It’s just like flashing the OS card for a Raspberry Pi. You will need to restore the backed up calibration data after reflashing the card. If you don’t have a backup, we have a copy of the original factory cal, available on request.

Next updates in the pipeline:

HSC’s Take- So there you have it, updates will probably be more fluid once the software engineer is dedicated to improving the camera. The painless update process is also welcome and the separation from a firmware chip makes it easier to try new things without bricking the camera. A re-flash of the internal memory card is all that is needed if you run into trouble by reverting to stock software.  The software will probably be very different in a few months with all sorts of bells and whistles. We are excited for the future of the Chronos 1.4 and other cameras that may come down the pipeline from krontech.ca.

We took the camera out for a quick test with firmware 0.2 and found it to be stable and with no issues. We like the new improvements and really are eager to see what the camera will become with improvements. The software is a work in progress and will become much more powerful as a scientific and all around shooter as it matures.

We took the camera out for a quick test with firmware 0.2 and found it to be stable and with no issues. We like the new improvements and really are eager to see what the camera will become with improvements. The software is a work in progress and will become much more powerful as a scientific and all around shooter as it matures.

Our quick unprocessed footage below from Firmware 0.2:

For more information about the Chronos 1.4 Camera and how to order one visit the official website at: http://www.krontech.ca/