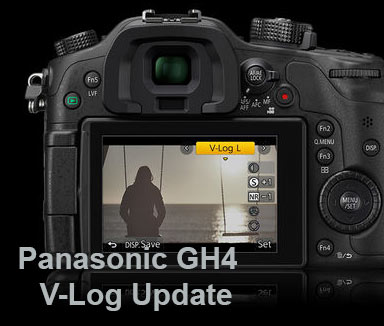 Back from vacation break “thanks for hanging in there” and not much has happened, we expect big news from Apple tomorrow but in the camera world everything has been subdued when it comes to news.    The Panasonic GH4 did get some news as the camera will now get the chance to be upgraded with V-Log high dynamic range flat profile mode but it comes at a $99 USD cost.  As to why this cost was added it’s anybody’s guess but we think it may have to do with protecting their higher end camera line by making the barrier of entry a little harder for GH4 owners.   We find it to be not too expensive but kind of a disappointment as a very small minority of the  user base will actually upgrade. Most people will not grade their footage with LUTs to get the color and contrast back to a usable level and would rather opt for the already pretty good profiles like Cinelike D and Cinelike V that come standard with the GH4.

As to the impact for the VLog update on the Panasonic GH4  you can expect a very flat profile and an increase in Dynamic Range from 10 stops standard to 12 stops in this mode.  Those blown out skies and cut off shadows will get more chance to shine now.

So as you can see the V-Log update is more about compatibility for grading across camera lines than a daily profile you would want to use.  However the fact remains that gaining 2 stops of dynamic range is no trivial matter and would come in handy in many shooting environments like dark and light contrasty scenes like a sunny day. If you are shooting RAW time lapse stills for creating a video later this update does nothing as RAW files are unaffected by the picture profile styles. This is strictly for 1080p or 4k footage that is baked in the H.264 codec.   You get to decide later on how you grade your footage.

Regarding the 96fps slow motion mode in the GH4 you will most likely get that 2 stop boost with the update as the HFR mode can use the picture profiles also. As with Cinelike D and V you can apply these to to 96fps HFR mode and get a flatter look with V-Log.

Panasonic instructions for applying the update:

You can Pre order the update and get more info on it directly from Panasonic Here: http://shop.panasonic.com/cameras-and-camcorders/cameras/lumix-interchangeable-lens-ilc-cameras/DMW-SFU1-VLOG.html

The update will be released mid September 2015!

GH4R: Panasonic is also releasing a GH4 “R” Variant of the camera that has the V Log profile already installed , it also removes the 29 minutes and 59 seconds limitation on recording on the original GH4. It is a minor update but one that should be bought if you are thinking about getting a GH4 camera.

Some samples of GH4 V-Log in action:

Tomorrow is Apple’s big iPhone 6s day so we’ll see what that brings to the table for slowmo fans. Thanks for reading!