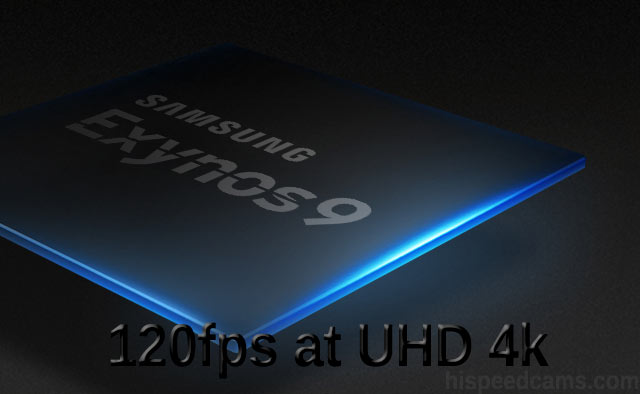 The new Samsung  Exynos 9 Series 8895 Chipset for smartphones has impressive new specs.  It claims the most advanced 3D and general processing performance for use in flagship smartphones. What interests us a lot is the direct claim that the chip can handle both recording and playback of 4k video at 120fps.

The UHD 4k resolution is 3,840 by 2,160 pixels or 8,294,400 pixels rounded up to 8.3MP per frame.  At 120fps this equates to 995 Megapixels /sec or near one Gigapixel.  This translates exactly to 480fps at 1080p full HD resolution or 1080fps at 720p.  This is quite astounding for bandwidth specs for a phone and opens the door wide open for real super slow motion on Samsung Tablets and Smartphones.

What does it all mean?

Sony is already touting 960fps in their latest Xperia XZ Celphone so it is not out of reality that 4k at 120fps and 1080p 480, 720p 1000fps could be in the cards for a Samsung product this year.  If they implement this chip in the Note 8 or Galaxy S 8 which would be their premium handsets there is a strong chance of impressive video specs on these phones.

The subsystem however will need extreme memory specs as well with several gigabytes dedicated to image sensor acquisition.  Furthermore the frame buffer should be deep enough for at least a couple of seconds of capture. We somehow think that the first implementation of the 4k frame rates will be in step fashion.  That means 4k at 60fps as a start with continuous recording.

We somehow think 480fps at 1080p will not be included anytime soon even when Sony seems to be at the vanguard of frame rates. One thing is clear however and that is the undeniable fact that higher frame rates in ever increasing resolution and quantity will be incorporated more and more in mainstream hardware.   We will continue to cover this chipset as releases evolve.  More information at Samsung here!– HSC

BTW: If you want to see what 120fps at 4k looks like see this RED Epic video. However do not expect this kind of quality from a phone.

The new Exynos 9 Series 8895 is the first processor of its kind to embed a gigabit LTE modem that supports five carrier aggregation, or 5CA. It delivers fast and stable data throughput at max.1Gbps (Cat.16) downlink with 5CA and 150Mbps (Cat.13) uplink with 2CA.

The Exynos 8895 is an octa-core processor, comprising of four of Samsung’s 2nd generation custom designed CPU cores for improved performance and power efficiency in addition to four Cortex®-A53 cores. With Samsung Coherent Interconnect (SCI) technology, the latest processor integrates a heterogeneous system architecture that allows faster computing for a wide range of applications such as artificial intelligence, and deep learning.

“In addition, with its advanced MFC, the processor supports video recording and playback at a maximum resolution of 4K UHD at 120fps.”

It also comes with video processing technology that enables a higher quality experience by enhancing the image quality; for example, for VR(Virtual Reality) applications, the Exynos 8895 delivers a realistic and immersive VR video experience at 4K resolution.

The Exynos 8895 has a separate processing unit for enhanced security solutions required for mobile payments that use iris or fingerprint recognition as well as an embedded Vision Processing Unit (VPU) that can recognize and analyze items or movements for improved video tracking, panoramic image processing, and machine vision technology.

“In addition to being built on the most advanced 10nm FinFET process technology, the new Exynos 9 Series 8895 incorporates Samsung’s cutting-edge technologies including a 2nd generation custom CPU, gigabit LTE modem, and more” said Ben Hur, Vice President of System LSI marketing at Samsung Electronics. “With industry leading technologies like VPU, the Exynos 8895 will drive the innovation of next generation smartphones, VR headsets, and automotive infotainment system.”

The Exynos 9 Series 8895 is currently in mass production.