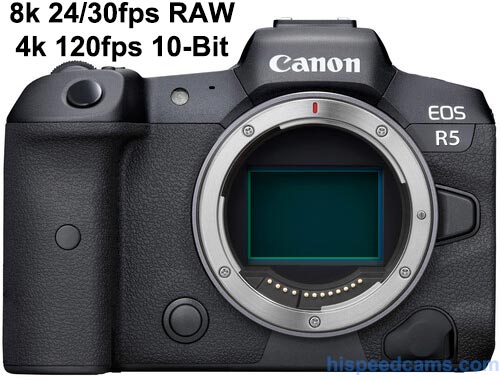 Canon has now released the final specs and estimated release dates for the EOS R5 and R6 cameras. There is a lot of good advancement in features especially in video mode as what many believe is an afront to Sony and Panasonic who dominate video recording on ILCs.  The R5 can record 24fps and 30fps 8k video or 8192 x 4320 pixels in RAW quality which is a staggering 1TB of storage or 2600 Mbits/s for only 51 minutes of recording time. That means that every hour you will eat up through a full TB of your RAID backup storage. We see this mode being transcoded to an intermediate format like Blackmagic RAW or BRAW or Apple ProRes as soon as possible.

There is more bad news, on the 120fps 4k front there is no other option of recording but All-I which saves every frame independently in 10-bit 4:2:2 which is good for excellent quality but at the cost of 1,880 Mbits/s  which is 224MB/sec or 13,447MB / minute of recording time. Better get a ton of memory cards and hard drives ready!

You read that right 120fps 4k video on the EOS R5 is only possible at the 1,880Mbits/sec data rate even in H.264 mode. Also interesting to know is the lack of 120fps Full HD 1080p or higher fps modes which are common on cameras from Panasonic or Sony.

Yes, the R5 gets overheated after recording video on the following modes and times:

We do not find any of these limits to be unbearable if you shoot clips of a few minutes but for event shooters, this is not the camera for you for many reasons, chief among the rec time limit, and secondly, the massive recording space needed.  For slow motion, the limit of 4k 120fps at 15 minutes is probably more than you will ever need so that is not a problem. See the video below:

Yes, the EOS R5 costs a staggering $3,899.00 US Body only and expected to ship at the end of July on the 31st.   The camera it stems from the venerable 5D Mark IV DSLR went on sale in September 2016 with a retail price of $3,499 (Now about $2,000USD), so the new R5 is now $400 USD more expensive at launch plus the new lenses are really expensive plus also needed to get the most out of this camera’s 45MP sensor and be able to get the 8 stop Sensor IBIS Stabilization with lens+body.  A good R5 kit will probably cost you around $10k for a three-lens setup with body and memory cards.  Having the latest and greatest from Canon or any other big brand will cost you, and this is a prime example of it.

Gladly we were able to find 4k 120fps video samples from the R5 and they look very good along with full AF which is an excellent feature to have in slow motion recording see below:

Hands ON with the NEW CANON EOS R5! THE GRAIL CAMERA! With1 20fps Clips Near the end by :Peter McKinnon

The good news is the camera delivers excellent 120fps 4k 4:2:2 with C Log and you can benefit from the low light capabilities, the IBIS stabilizer, and also the Autofocus. As of now, it is the best implementation of 4k 120p out there with no real compromises.  It is good to see this mode introduced which means it will become ubiquitous in the next few years on all sorts of brands. We would like to see 1080p 480fps be equally delivered wince it should be comparable in terms of data rate to 4k 120p.

Sony just confirmed that the Sony A7S Mark III is coming soon and will probably be a camera that will eclipse the R5 in video mode as it’s heritage of being the low light champ should be maintained here along with competitive features. We expect that camera to also offer something juicy in the high frame rate spec.  Sony has not provided any details but rumors are heating up. We will not be surprised to see 240fps Full HD and 120fps 4k on the new A7S III.

Canon’s R5 and R6 are very good cameras with a few quirks that are ideal for specific types of shooters. However, we do not believe these cameras will be video darlings with production houses unless they have very specific uses and requirements. The 8k mode has according to early testing a monstrous rolling shutter and the 4k modes have a crop when you want to retain the best details without line skipping. These cameras are better used by professional stills shooters that are able to leverage video at times like in the case of a model fashion shoot where you can record 8k RAW video and never miss a pose in ideal conditions. However, for freezing action the rolling shutter on this mode will not be ideal and will need prohibitive amounts of light. Photo mode is where the strength of these cameras shines through.

So let’s wait and see what other manufacturers bring to the table, Panasonic and Sony should present very interesting cameras this year which may present 8k with more controlled data rates and easier workflows. We are glad to see Canon strike hard with a new camera but it seems a bit constricted on its capabilities considering the drawbacks for video shooters.  -HSC