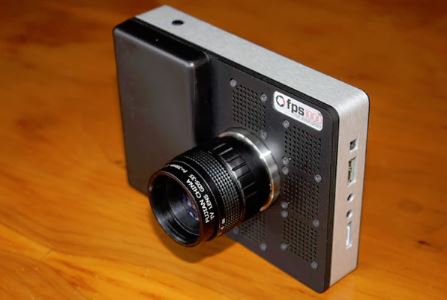 We also have new images from the case and a few tidbits on what may be possible to do for 3D slow motion which is a a field relegated to a few labs and 3D Hollywood productions that need high speed shots shot in stereo.  The fps1000 HD has an option for you to do 720p high speed video in full stereo to use in a 3D production or scientific endeavor.  It is pertinent to say that other cameras including the edgertronic SC1 and SC2 can be rigged to shoot in 3D easily with Genlock due to their size.

The finding is closing in on £60,000 British pounds which is almost double the £35,000 Pounds goal for the campaign with 43 backers as of this posting.  It is interesting that of the available options only the fps1000 HD 128GB flash memory configuration has been backed for. 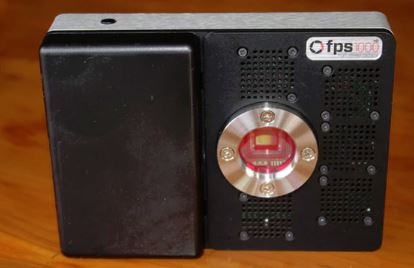 The interest in the 64GB model has not been measurable which is easily explained by the initial price difference of only £100 Pounds.  People want more for their money. And now that the British Pound is lower in value compared to the US dollar at the fault of Brexit primarily it makes it an easier proposition to back these cameras.  Today £1 British pound equals $1.29 USD which is much less than a year ago.

Update on the 3D and Genlock and other capabilities by Graham Rowan:

The fps1000HD also generates a low voltage trigger output pulse every time a frame is captured. This allows you to synchronize external lighting or other components to the capture rate.

By connecting the trigger output from one fps1000HD to the trigger input of another, the second camera will automatically synchronise itself to the first. In this mode the second camera will capture video in exact frame synchronisation with the first. Furthermore, in this mode you can control the recording of both cameras from the first – thus when you press record on the master camera, both cameras will start recording in exact frame lock.

The obvious application for this is to record in stereo/3D. I experimented a little with this and produced some nice 3D videos. This is my very first entry into this domain and clearly I have a lot to learn but using a very simple base plate with screws for 2 cameras, I was able to take some hand-held stereo videos. This is the device I used:

This stereo video was made using a couple of extra steps in Adobe Premiere Pro which I normally use for creating videos. You will have to use Red/Cyan glasses to see the 3D effect.

You do of course need two cameras for this application. But with a simple modification I could provide a camera with 2 image sensor boards mounted on the same motherboard. This would provide a very compact hand held 3D camera with 2 lenses with the correct inter-ocular distance between them. For anyone who is interested in this I have added a new stereo camera reward at a significant saving over 2 cameras. There really doesn’t seem to be any other low cost high frame rate  stereo camera on the market.”

HSC’s Take on the new info:

There is value in having the 3D camera not be two separate bodies as the inter ocular distance could be made to precisely match average human eye distance without pre adjustment;  it would not require two separate cameras but it will probably require  different battery configuration along with some trouble shooting and electronic emissions dilemmas.

We think that if no or very few backers do in fact opt for the stereo version, Graham is better off just offering two cameras to the backers in question without the expense of developing a different product for now.  It is best to concentrate on the fps1000 HD, fps1000 platinum, fps1000 4k and fps1000 Hex which are yet to be fully shipped. When those orders are fulfilled it would be now a matter of doing some market research if such a product would be in demand.  We have seen a lot of 3D camera rigs that are just sitting there gathering dust as the stereo craze with the 3D HDTVs faded as another fad with limited longevity.  Spending resources on yet another product as of now should be scrapped for sake of simplicity and time frame.

Genlock is a great feature to have and should provide professional level sync to shoot with multiple cameras and record  events from different perspectives.

We congratulate Graham on the campaign’s great success and for improving the product far past the best expectations of just a year ago regarding the fps1000 line of slow motion cameras.

For more information about the fps1000 HD, the possibility of backing and receiving a unit yourself and more info on other fps1000 cameras visit the Kickstarter campaign page here:

Disclaimer: We are not affiliated with fps1000 or any other camera company for profit, advertising or other business endeavors. We only report on the news in the high speed industry. You should do your own due diligence before buying any camera or product recommended and or covered on this site.