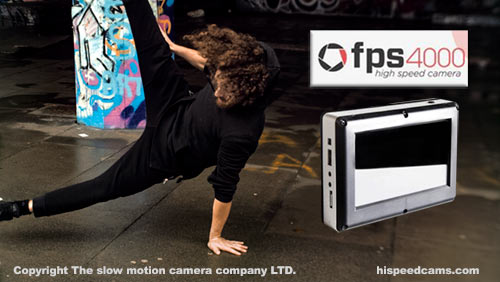 The fps4000 camera hinted in Q4 of 2017 as the camera to replace the fps lineup is now entering its first production batch and it will fulfill the promises to backers that expected a camera either in 1080p or 4k.  The fps4000 will reach up to 4k resolution at 500fps in it’s highest configuration. This is half the performance of the Phantom Flex 4k camera when it comes to frame-rate at that resolution.

The fps4000 also has a lower resolution configuration for 1080p at 2000fps.  Back in 2017 on the announcement, there were configurations up to 4000fps at 720p using different sensors. The hardware main design seems to be shared among the cameras which makes it possible to offer different models at accommodative costs. This should allow all Kickstarter backers to have their promised camera and continue the line for new customers who need low cost extra long recording times in camera.

The fps4000 design makes it possible to record up to 120 seconds of footage in high speed which is a first for this type of camera. Graham elaborates on the point of editing long stretches of footage and action that are really impossible with other slow-motion cameras which record only mere seconds.  By being able to record 2 minutes per clip the fps4000 can free the video professional to experiment and record spontaneous motion that is not pre-planned.    In the future maybe all footage will be recorded at high frame rates with the possibility to ramp and slow an edit at any point. The fps4000 aims at that possibility. 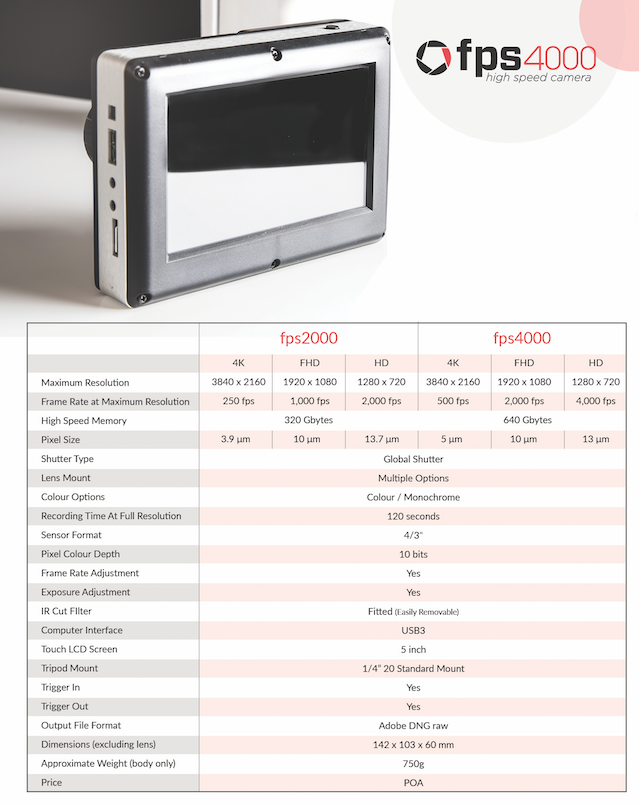 The chart above which was shared in 2017 shows the camera lineup. As you can see the data rates and recording times are extreme.

The footage released today shows a pretty good array of shots that easily let you judge the initial power of the camera line.

It is apparent that there is a real 1080p frame worth of detail recorded by the camera. There are some slight image artifacts in selective frames that can be seen on playback which should be fixed by software update.  The motion cadence is very nice and there seems to be a good amount of latitude/dynamic range in the image.

Many would point out the greenish tint on the image and we can probably point to either the color science/white balance in camera or IR contamination. Luckily the fps4000 records in DNG RAW format which allows for RAW color correction and grading.  We asked for a couple of frames to try our go at the footage and were pleased with our tweaks.  Color can be managed to look properly and accurate.  Maybe in the future, a step can be saved by applying in-camera a DNG profile to the frames. The softness in some edges of the frames are probably based on the lens used in the camera; maybe a tilt-shift and not a problem with the camera itself because some shots do not exhibit these phenomena.

Below are our graded frames from the footage provided by Graham Rowan:

We are happy with the image quality and it is a clear step up from the fps1000 footage we were able to judge last year. The fps4000 can create beautifully cinematic footage with a large sensor and if it can record up to 2min worth of it, it may change the way slow motion recording is approached.    We will receive an fps4000 camera this year in the 4k resolution which should provide us with an opportunity to bring the process of recording and working with the files to you.

See the full update by Graham Rowan from the Kickstarter project page below:

fps4000 Update by Graham Rowan Below on Kickstarter January 9th, 2018:

I have had a lot of questions regarding why I have been developing the new fps4000 model when I have yet to deliver all fps1000 models. From the outset this project has been one of ongoing development. With hindsight, the original kickstarter prototype was clearly not ready for market. From that point I have been trying to get it to market in a form that fulfilled its original promises. At the same time, out of necessity, I have had to keep the company running so it stands a chance of success. The development of such a product for one person has been a huge task. I have tried to get help along the way but have invariably had to learn how to do most things myself. It is not surprising that it has taken so long.

However, through many revisions and sensor developments, the design has stabilized and has kept up with developments in the market in general. As well as commitments to fps1000 backers, many of you upgraded to the fps4000 in its various forms, so it made sense for me to develop these models which could satisfy that section of backers while providing the opportunity to offer cut down versions to fps1000 backers.

I have finally got to this stage now. The first fps4000 production batch is being made and I have a cut down design which I will be providing as the fps1000 solution. I expect to be able to ship these in March 2018. It will be using a new sensor which is significantly better than the original one. It shares much of the hardware with the fps4000 but will utilise lower density memory parts which were already purchased soon after the kickstarter.

I know this is extremely late but throughout the process, I have been single-mindedly moving towards a solution. I apologize once more for the delays but assure you that I will continue my efforts.

Below is a link to the first video made on the fps4000. It is not perfect but shows the potential of the product. I wanted to produce something that suited the target market for this camera and that shows the advantage of a long record time in a time-critical shoot.

Some of the sequences would not be possible on most high speed cameras as they are 10s of seconds in length. I was able to record a couple of minutes of high speed video in a time-limited shoot (the performer was hired for 1 hour) and worry about editing afterwards. The street sequences were also taken over about half an hour of elapsed time. Back in the edit room all clips were transferred to a PC using the high speed USB3 interface and the transfer program provided with the camera. During the transfer process the program produces a real time output (ie not slow motion so the entire 2 minutes lasted 2 minutes). This allowed me to quickly look through the recording to find which clips I wanted. Then I knew which detailed sections to copy over to the editing suite. Without this facility it is incredibly difficult to look through hours of slow motion playback to find interesting sections!

The images were exported from the camera in raw format and converted into jpgs in the transfer program for import into Premiere Pro which was used for editing the final sequence.

The speeded up sections were done easily in Premiere Pro using its standard functions. During the edit all frames were available – that consisted of over 200,000 frames.

The clips were edited to the sound track which I commissioned specially for the shoot. Finally the entire sequence was colour corrected in Premiere Pro to balance light and colour balance for the various different clips which were filmed on different days and at different locations.

All of this would apply equally to the reduced fps1000 versions. The fps4000 just does this at a higher resolution.

Here is the video: https://www.youtube.com/watch?v=by3RfiW4cy8

2 thoughts on “fps4000 In Production Plus New Quality Footage!”