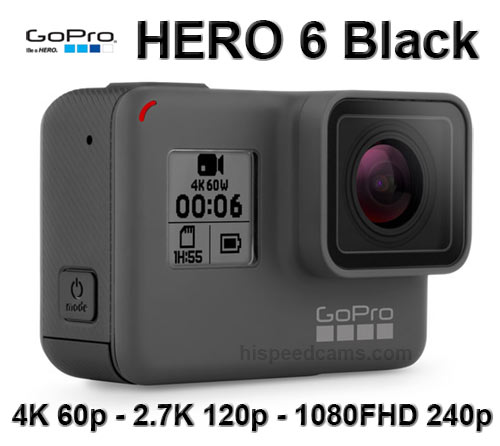 You can see heavy aliasing on the 240fps 1080p samples which lowers the higher you go on the resolution. 2.7k has some and 4k is pretty much gone.  You will not be able to use the 240fps mode for quality critical shoots but it will be a darling of Youtube footage for a long time.  It is still an amazing little performance leap for a tiny camera.  It is a worthy upgrade from any GoPro before it including the Hero 5 Black.

Of note is the new and improved digital stabilization which aims to compete with lens stabilizers on other cameras. It is unclear how it works but it seems it is getting telemetry information from sensors inside the camera to counter vibrations and bumps.  The results are extremely good “see below” and will make looking at GoPro footage a lot more pleasant.  Expect to have some cropping of the sensor area as all stabilization on images yields space in the frame to reduce motion.

Rolling Shutter: The GP1 will reduce rolling shutter for all the recording modes in the Hero 6 Black drastically.  As you can see from the samples it seems to have improved so much that you can barely tell it has the Jello effect. More testing needed but there is a clear improvement here.

There is a lot to digest from the Hero 6 Black but the clear take away from the release is that the camera is a vast improvement from the Hero 5 Black with H.265 codec support which according to GoPro yields a 30% improvement in video quality for the same bit rate. The Slow Motion performance is now class leading in the space and while there is some resolution loss; the color, dynamic range and motion qualities are excellent.  The improved gimbal-like stabilization is an impressive feature that is only electronic which boggles the mind.

The Price at $499 is still within affordable margins and we would be hard pressed to recommend any other action camera today when you can get so much from the Hero 6 Black. It now the gold standard in portable sport rugged cameras.

It will be interesting to see how Sony and Yi will respond to this camera but if you need a new action camera to replace your older one or get your first taste of the category; the Hero 6 Black is a no-brainer decision that will deliver quality at a price that won’t hurt much.

We will have more slow motion samples as they become available.

Info found on the AX-700 Help Guide by our reader Slowmosage!

HSC Note: Looks like the AX-700 and the other recent 1″ sensor prosumer cameras announced by Sony will forego the time priority mode in HFR for a single HFR mode with the utmost quality at 3, 4 or 5 seconds recording depending on frame rate.  More info will surface after the cameras are tested in the field.

You can record slower movies than movies that are recorded with the Slow & Quick Motion recording.

The Super Slow Motion recording is compatible with [XAVC S HD] only.

The setting items differ depending on the setting of

Sets the frame rate for the Super Slow Motion recording.
When selecting [60i]:

You can select the timing to start recording when pressing the START/STOP button.

A: Select [EXECUTE] on the SUPER SLOW MOTION screen.

B: Press the START/STOP button

The playback speeds based on the recording format and frame rate setting are as follows.

The playback speeds differ depending on the setting of

The recording times differ depending on the setting of