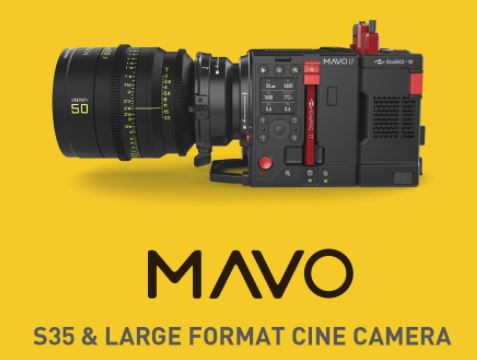 Kinefinity the company behind the pretty capable and high-quality Terra cinema camera has announced in preparation for NAB 2018 the new MAVO 6k cinema camera in s35 and Large Format sensor options in the LF version.  Along with the new body design and expansion options the camera will include ProRes 422HQ, ProRes 444 & ProRes 444XQ recording.

Kinefinity also has a RAW format “.KRW” and this has been updated to version 2.0 to support the new camera. This is akin to REDCODE RAW as the .KRW format can compress in RAW anywhere from 2:1 best quality lossless to 10:1 with more quality loss while maintaining the benefits of RAW like dynamic range, white balance, and higher bit-depth color.  It also offers the possibility to record on cinema-DNG format In-Camera at 3:1, 5:1 and 7:1 compression. The camera has several high frame rate formats depending on crop resolution.

There is still no firm ship date but should be this year.

From the Chinese Page Google Translation: “4K 100fps   Both MAVO and MAVO LF have a strong frame rate ability. Both can output 66fps in 6K Wide full-frame output, can be directly recorded to 100fps in 4K Wide, and can achieve 120fps in 3K Wide for cropped format, and 2K Wide can reach 192fps. It also has degraded ability, the lowest frame rate is 2fps. The frame rate can be arbitrarily set between the lowest frame rate 2fps and the highest frame rate supported by the Sensor’s frame rate, the accuracy of 0.001fps. When recorded, it is recorded at the project frame rate (for example, 25 fps). This way you can easily achieve fast motion and slow motion, providing you with more technical means to achieve the lens language you want.” 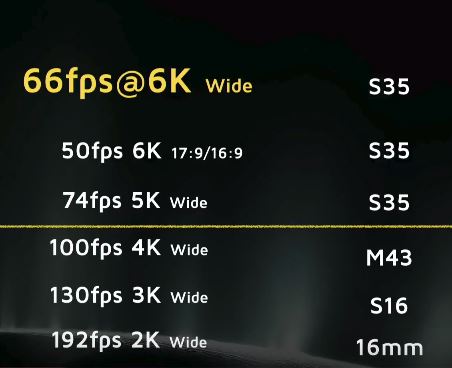 So we get 4k 100fps and 3k 120fps which is great but the highest frame rate at 2k is not 240fps which is the standard we would expect. Still, it has a capable 192fps in crop mode that may be useful.

As evidenced by the Philip Bloom Snow video above, the quality of Kinefinity high frame rate recording is class leading with excellent detail  The Kinefinity Terra 4k, however, is capable up to 260fps with a heavy crop which is used above. We expect the MAVO to maintain or improve on this quality. If you need higher frame rates at up to 260fps the Terra 4k might be a better option than the MAVO for a considerably lower price. 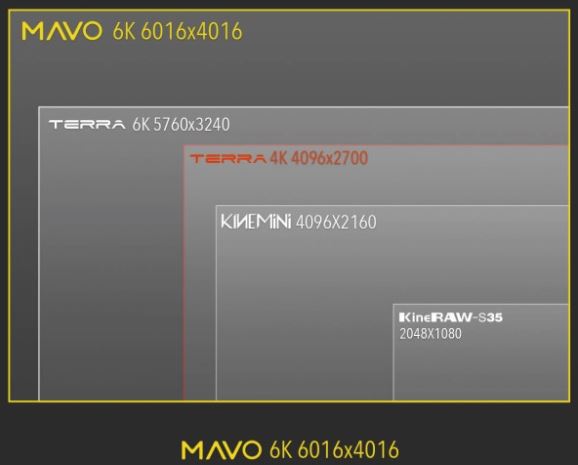 A considerable increase in pixels to 6k compared to 4k does make formats like 2k and HD seem so puny. 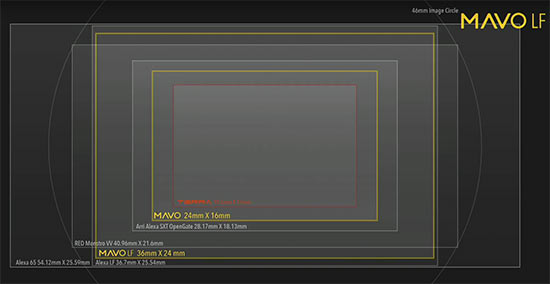 The sensor size chart above shows the MAVO S35 Compared to the Large Format LF version of the camera.  Kinefinity is going against the RED Monstro sensor and the ARRI Alexa Large Format cameras. If the MAVO is able to be consistent, bug-free and delivers on the image quality front then it could be the best bang for your buck in a cinema camera capable of extreme quality for any type of production. The Kinefinity cameras have already been used in several productions and from the samples below you can clearly see how good the recorded image is.

We hope to have slow motion samples of the MAVO as soon as they are available, in the meantime see some Kinefinity footage below shot recently for a close enough match on what to expect from these new cameras. -HSC