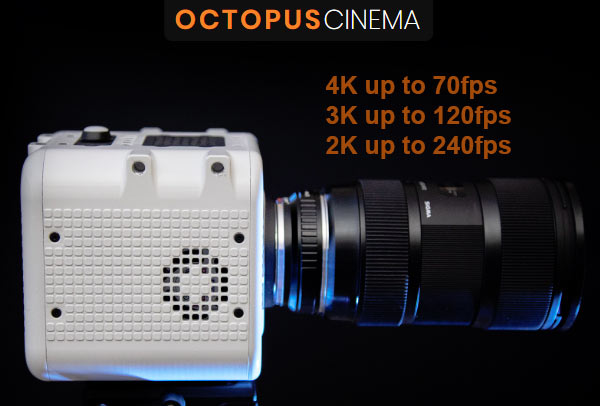 The recently announced Octopus Cinema Camera with a modular sensor, mount, and other components could, in theory, become a customizable professional solution slow motion camera that is unencumbered by firm specs but by a fluid and upgradeable sensor and component path.  The Axiom camera is also something akin to this but has yet to ship. The Octopus has in prototype form been fitted with a 4/3 sensor capable of up to 240fps in 2k RAW and a full-frame that allows 3k up to 100fps.

The body looks eerily similar to Phantom cameras with the white machined exterior with fans and ports protruding the body.  While 240fps at 2k is not what we could call really professional slow motion, it is based on an open architecture in hardware and software that could window the sensor down and possibly offer more frame rates at 1080p and 720p for maybe a 480fps RAW capture in HD. 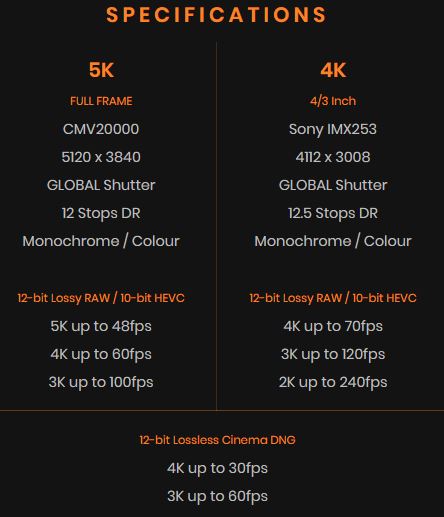 The 4/3 sensor is the Sony IMX253 which offers a global shutter mode and high frame rate support. You can read more about this sensor here: Sony IMX 253 information. This sensor should be able to record 480fps at HD 720p if the camera is programmed to do it.

The full frame sensor will be the CMV20000 (Information here) which is a pretty advanced 20MP sensor allowing 5k capture at up to 48fps.  This sensor will be geared more for cinema people while the 4/3 would cater markets for TV, Web, and documentary. For slow motion, it is clear the 4/3 sensor makes more sense.

We can already fantasize of another sensor option that allows higher frame rates and a possibility to program the camera to be a true slow motion powerhouse with pre-record, post-triggering and remote monitoring.

XIMEA provide a range of high-performance imaging modules which can be interchanged allowing the OCTOPUS CAMERA to have a fully upgradable image sensor.

The power of a platform like this is based on what you can do with the customizability. If you could place a 2000fps 1080p sensor, for example, you could have a very capable production camera that really shoots slow video that can be analyzed professionally.

The OCTOPUS CAMERA uses the compact Intel® NUC as the processing board. Components can be removed and upgraded including the board itself when newer boards are available.”

Since the main component board is also upgradeable you can, in theory, get a board full of fast DDR memory for loop record at a fraction of the cost of a phantom camera.

All this sounds great but the release date for the initial camera is sometime in 2020 with no price mentioned. The amount of work this camera needs to become a reality is pretty huge. Projects like the Axiom have thousands of hours of work by really incredible people and has yet to ship in final form.

The Octopus team is small according to information on the web and there is only a prototype product shown.  We saw the Fran camera go down in flames with big promises just recently and there is no reprieve when you mess up in the camera business.

We wish the Octopus team much success and hope to see a high frame rate sample or better yet, a module of sensor and board that shoots 1000fps or more in the future.  A camera like this could allow for an upgradeable slow motion camera system that grows as fast as technology allows, making it a first in the high speed market. Disruption could be the best thing in slow motion gear or just a spark that fizzles out by bad execution. Lets hope is the former. -HSC

You can find more information about Octopus Cinema Camera at the official website. http://octopuscinema.com