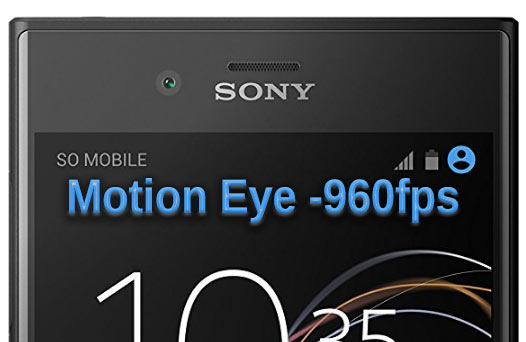 The Xperia XZs which is the lower spec phone that supports Motion Eye 960fps by Sony is now shipping and available for ordering.  At $699 it is not a really cheap phone but it is nowhere near the $800+ of flagship phones from Apple and Samsung. It is still under-powered compared to the latest Galaxy S8 release but where it counts for us the Slow Motion feature it is on a class of it’s own.

The quality is pretty remarkable for a phone and while the duration of recording is under 1 second, it translates to 40 seconds playback in a 24p timeline. Resolution is stated at 720p and while the frame is really that size, there is some subdued aliasing and moire in extreme detail which means Sony is removing some line information to get 960fps.

The end quality is still probably the best slow motion feature of any smartphone to date.  This is a milestone in performance due to the clever Sony DRAM+Sensor implementation of the Motion Eye system. This is the same technology as our favorite camera last year the Sony RX100 V; but reduced to a much smaller sensor package for phones. We estimate the technology will continue to evolve and Sony as of now remains on the forefront of the feature. Their tech demo already shows 1080p at 1000fps which will probably surface on a high end phone when the technology is allowed to see the light of day.

It is of note that the slow motion quality on either the XZs and or XZ Premium will be identical as they share the same camera module, sensor and lens. If you just need the slow motion and do not care for extra speed, better build quality and water protection then the XZs is a cheaper alternative with all the slow motion prowess.

There you have it, the Xperia XZs & XZ Premium phones do pack some serious slow motion prowess.  Be sure to check out the channels of these video creators to support them.  You can order the Xperia XZs from Amazon here!