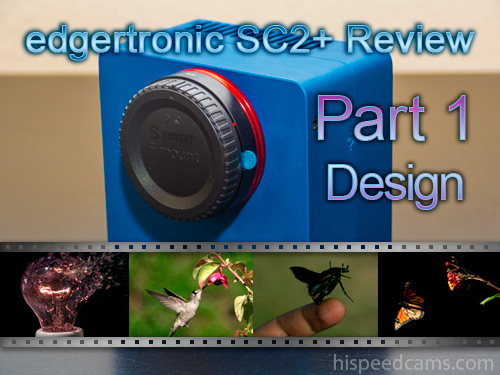 This year Sanstreak the company founded by Mike Matter the mind behind the edgertronic SC1 is now launching the edgertronic SC2 and edgertronic SC2+ cameras which offer performance above and beyond what the original edgertronic camera was capable of.  Software wise it is nearly identical with the evolving code base that has matured in the last two years is used with nearly 100% support in the SC2 and SC2+ cameras.

A Little History on the edgertronic SC1:

By that time the project already had gone through two revisions or hardware prototypes A and B that were working fully.  The project was headed to final revision C with a finalized hardware circuitry, case design, camera mount and ports.  In just a month that the project was posted on Kickstarter, it was fully funded with 109 backers who pledged $170,175 USD.

Flash pulses freeze objects in motion at high speed and captured on film like that of a modern DSLR high speed stroboscopic hot shoe flash function. Doc inspired Mike Matter to develop his own flash strobe and take high speed images and eventually go to MIT himself to become an engineer. Mike Matter has since worked at Apple among other Silicon Valley companies developing top products for decades. The edgertronic is his own creation and contribution for the world of high speed imaging.

An interesting note is that manufacturing, assembly and design are done in the USA, for those folks who are keen on buying products made in America, this camera fits the bill perfectly!

Development has continued on the camera and lots of new features have been added to the software that are hardly present in many high speed camera solutions.  To their credit, the edgertronic engineers delivered a product on time, that exceeded backer expectations and continues to sell.  By mid April 2015, the edgertronic has been shipped to nearly 400 buyers.  Talk about a concept well executed.

The edgertronic SC2 and SC2+ make an entrance:

The new edgertronic SC2 and SC2+ are reminiscent of the original SC1 camera in body and design. Mostly unchanged in the body and design except for  a red anodized aluminum ring before the Nikon F Mount to allow for infinity focus on a more distant flange because of the new CMOS Global Shutter sensor sitting a little closer to the port opening. 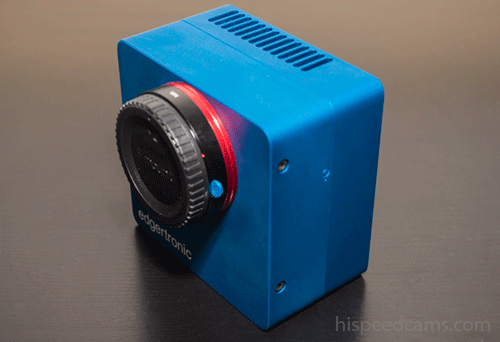 The Main hardware difference in the SC2 vs the SC2+ is that Monochrome is the only option along with 8GB of RAM.   However the performance is also lower with a maximum frame rate on the SC2 at 720p of 3,350fps as opposed to the SC2+’s 4456fps.

We were sent a demo “retail”  unit which is a carbon copy of what the customer receives when they get their new edgertronic camera.  The first impression is of wonderment when looking at the Pelican Case, which comes standard. This case is durable, dust proof, watertight “not waterproof” and resists changes in atmospheric pressure like that of plane cargo bays.  It has a built in purge valve for pressure release before opening. Pelican cases are a de-facto standard for shipping costly camera gear across the globe and shipping the camera in one of these cases is an ideal match for storing it after use as well.  It will be ideal if more manufacturers shipped their cameras in such a case. Once you take out the camera body it is apparent that a lot of care went into designing and polishing the little details in the simple but useful case. The Type III Hard Anodized Aluminum enclosure in aqua “Teal” blue color, is beautiful to look at and it is supposed to be hard to scratch or dent easily. It is 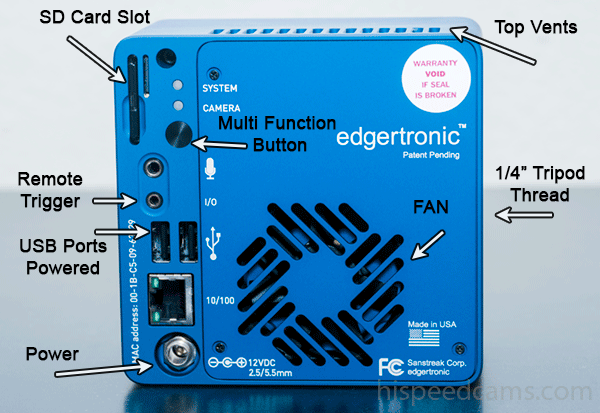 Note: All resolutions on the table above can work at 1280px horizontal without affecting final frame rate performance.

Here are some footage samples shot with the edgertronic SC2+ at 4,456fps 720p which is the ideal resolution for TV and the Web.