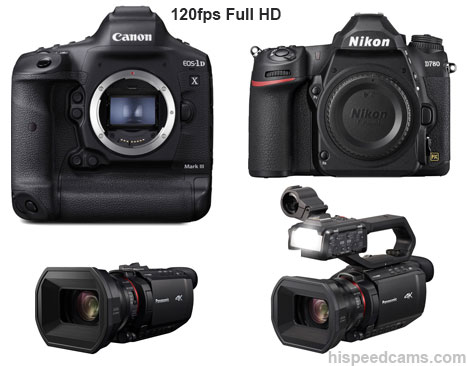 CES brought a lot of weird tech like smarter toilets, personal companion robots and the occasional wearable smart tech that you really can’t wash in your home.  As it is always the case at HSC we were looking for slow motion capable cameras and sadly we saw very little at the show. We are now showcasing three manufacturers who had 120fps Full HD cameras announced at the show and no frame rates above that.

These are primarily 4k 30 and 60p cameras that have a 1080p 120fps mode as a feature that no new camera can really ship without. Sony has already standardized this format in the last few years on most Alpha cameras and Panasonic has even gone above at 180fps and 240fps in some cases like the GH5 and S series.  The cameras presented here are mainly either stills full-frame beasts or more standard video camera like.  By 2020 we would have hoped to see better than 120fps 1080p on cameras of this caliber but it seems we will have to keep waiting…

Here we are in 2020 at 120fps, seemingly stuck in the past as far as frame rates go. We would have expected 4k 120fps and 1080p at least at 240fps by this time frame on many cameras but it looks to be a mirage that simply did not materialize.

Hey wait that video above is from the Mark II version of the camera and that is right. There is no available footage from 120fps mode on the Mark III that is available outside of Canon testing.  So we included the same 1DX Mark II spec of 120fps 1080p so you can get an idea of how it will perform on the Mark III. Anecdotal comments from testers say that video quality is improved across all modes which means the 120fps quality should also be better along with even tighter Auto Focus.

For $6,499.00 Body only with a  February 13th Ship-Date, the 1Ds Mark III is not a camera to buy for 120fps Full HD shooting, it is a tool for professional sports photographers to go and kill at the Olympics and World Cup at 20fps 21MP stills.   Good to have 4k 60p also which will probably be used more by shooters but don’t expect either mode to be class-leading. This is a beast of a stills camera, probably the best out there for the price and video while very good, is relevant for lower frame rates at higher resolutions.

The Nikon D780 gathers essentially all of the Nikon Z6 Mirrorless video features and bolts them into this camera. The video quality is excellent along with inheriting the video Auto Focus from that camera. The 1080p 120fps sample above should give you some indication of the video quality that the higher frame rate mode can produce.

At $2,296.95 Body only and out Jan 22nd, this is a much more affordable option than the 1Dx Mark III camera but still is above what many would pay for 120fps Full HD slow motion video if that is your focus. Any Sony Alpha or Panasonic G camera that has the feature can do it for half that price on the low end.  Still, it is good to see Nikon incorporating these features across their entire Full Frame camera line.  Now let’s see them innovate with higher frame rates at least on APS-C sized sensors!

The Panasonic HC-X2000, HC-X1500, and AG-CX10 camcorders announced at CES are essentially very similar cameras and simply rely on connectivity features to differentiate them from one another. These are smaller sensor camcorders at 1/2.5″ intended for live broadcast production that allows for budget-friendly creation of on the go studio or smaller production houses that need a three-camera setup. Ideal for Youtuber’s and other Vloggers.  The Two more capable options the X2000 and the CX10 have SDI out which can be connected to a switcher for live production.

The small sensor is not so bad in Low light especially in 1080p and can compare well to 1″ sensor cameras due to better signal handling on the MOS architecture Panasonic is using here.  The video below by Holdan Limited showcases the Low Light capabilities which look very clean on a 4:2:2 10 Bit internal recording at 150Mbps!

Sadly there are no 120fps samples from these camcorders to show yet but expect them to be acceptable considering how good the norman 1080p mode looks.  The impressive 5 axis stabilization, XLR terminal adapters, ability to use P2 in the CX10 for new casters and SDI on all but the X1500 make these cameras great for all-around B Roll production and low budget TV stations that need to cover events on 4:2:2 color and up to 60p 4k at 4:2:0 200Mbps.

All cameras share the same video modes which mean the 1080p 120fps mode should be identical on all, making the X1500 the best bargain for price but the X2000 as the most complete version if you ever want to outgrow the basic features and migrate to initial live production. The HC-X2000  seems to us the best of the three for on the go quality production, that will not break the bank, they will also not break any slow motion records with 60p 4k and 120p 1080 Full HD which is the max these camcorders will handle.

So what to do…hmmm Nuttin?

If you need slow motion above 120fps then avoid all three of these camera lines. There is nothing above 120fps 1080p and 4k 60p for you to record on.

As for stills and normal video production, all are very nice options with the Panasonic’s being the most video-oriented with XLR input options and unlimited 60p 4k recording.   Panasonic is probably going to announce a successor to the GH5 sometime this year as a GH6, with what we hope will be 240fps full HD and maybe just maybe 120fps 4k in some capacity along with 6k video.  We would wait for them to show us their new hardware before committing any dollars to current technology.

If you need a camera now make sure to visit first our HSC Camera Guide with over a 100 cameras rated by frame rate/price for you to choose from.  Stay tuned for more on slow motion options and we thank you for reading and following our links to support our mission.  Happy 2020– HSC