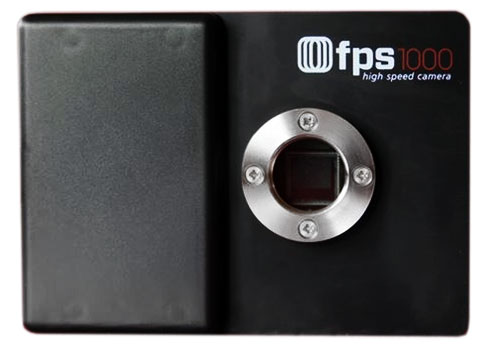 The fps1000 affordable high speed camera has hit several milestones recently such as shipping the platinum fps1000 and some users actually producing first footage with them. The focus now is on shipping the rest of the gold and  silver models which were lower spec and cost versions which were part of the original Kickstarter campaign in 2014 here.

Also the latest update mentions fixes in some components that will make the shipment of the double platinum and 4k camera possible in the near future. There is also new footage in this update so continue reading for the full information.

For reference these are the specs for the fps1000 silver and Gold as they were promised back in 2014.  Specs are subject to change on delivery!

Below is the fps1000 update by the creator Graham Rowan with our commentary:

It’s been a little longer than usual since my last update and I’ve been getting messages asking for news. In spite of the silence there has been a concerted effort to meet shipment of pledges and to complete new products.

First shipment status. Shipments are going out continuously. The early production teething problems have been sorted out and building cameras is relatively straightforward. Silver and Gold cameras will start shipping this month – these have been delayed while first Platinums are shipped and proven. Volumes should be ramping up this month.

As a result of some customer feedback I feel I should point out a few things: batteries are not included (due to shipping restrictions on Li-ion batteries). There is an SD card provided which is in the camera. This is the recommended SD card that is known to work well with the camera and is low cost. The SD card also contains the latest User Guide.

If you have any individual questions regarding the shipment of your camera then please email me.

HSC: It is good to see order fulfillment happening and the Gold and Silver versions of the camera being filled in the near future. Many of our readers have Gold or Silver fps1000 orders and have been waiting patiently for 2 years.  Seems this is now an upcoming possibility in July or August of this year.

I have tried many many different types of batteries. The newer fps1000 models such as the Double use more power than the current Platinum and many of the batteries I have been using simply won’t work. This is not because the new camera is so power hungry but that the battery specs are simply not accurate. I now avoid batteries with high mAh ratings as they just don’t work in practice. My current recommendations, all of which power the Double quite happily, are from the mainstream suppliers such as Samsung, Sony, Panasonic and LG. Some that I would recommended are:

Sony US18650VTC5
HSC: As far as batteries, it seems high quality cells are going to be the norm to avoid voltage fluctuations and corruption if the power is too variable. We will test a few 18650 batteries when we receive a unit of the camera and let you know our recommendations and results. The ones above are a good starting point and we have linked to them for easy search below:

Last time I told you that there was a second iteration board being produced. Well this has passed all tests and the Double Platinum is now development complete. I can also release more information about this new top of the range fps1000 model. It is performing beyond my expectations and the new sensor is incredible. I am extremely pleased with the results. Subjectively the low light sensitivity has improved considerably and the 12 bit pixel depth adds significantly to the image quality. Here are the headline facts compared to the standard Platinum.

Here is the first 1,000 fps 720p video from the Double Platinum. The whole action took place in about a second – the first part of the clip is in simulated real time. The slight jump at 37s is due to some frames that got corrupted in the process of making the video. The lens is the standard lens shipped with the camera.

HSC: As Graham Rowan Points out the camera is already producing very compelling images at first glance. We noticed some slight banding in the image that will be corrected by calibrating the sensor.  For a first test it seems the double platinum camera is already beating the pants of the single platinum by incorporating larger pixels as lower resolution has better light gathering power.   If you want a 1000fps camera that shoots 720p the double platinum at £1,599.00 British pounds is a very compelling option. Especially now if you have USD or other foreign currencies as the pound depreciation has helped considerably in the exchange rate. It comes out today at $2082.70 US Dollars which is a pretty good deal. We expect pricing to reflect the pound drop going forward at some point.

I am now focused on the new 4K sensor board. This is also a second revision board with the initial power problems sorted out. I will know in the coming week whether this is the final version and will post the first video as soon as I have one.”

HSC: We expect to see imagery from the fps1000 4k version in a few weeks at this pace. Probably there is no camera from the fps1000 range that gets as much interest due to the resolution alone which will probably peak at 200fps 4k and allow for 1000fps at full HD 1080p resolution.   Shipment should come soon after. No word yet on the camera working off a power supply and passing FCC and CE certification as of this time.

We will keep you informed of new developments on the fps1000 camera line and many other cameras in the future. Thank you for your support of HSC!

More information about the fps1000 camera and ordering one for yourself here, we do not sell cameras, only report on them:  https://www.kickstarter.com/projects/1623255426/fps1000-the-low-cost-high-frame-rate-camera/