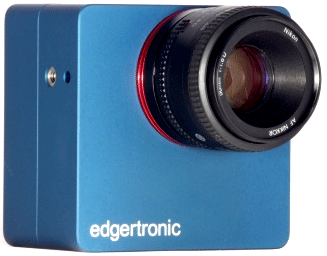 The edgertronic high speed camera by Sanstreak  has been a darling of scientists, industrial, education and content production users since 2013.  The Kickstarter project not only delivered on the promise but became a full fledged high speed camera provider afterwards with more than 540 cameras shipped to date.

The edgertronic SC2 will be available in two distinct models based on the memory capacity and or monochrome / color capability.

edgertronic SC2+ color or mono, 4450fps 720p $12,990 (16GB) Memory
As you can see from the body of the camera, the chassis and camera features are nearly identical to the original edgertronic SC1 including:

The main changes in the new edgertronic SC2 come internally with a different and improved CMOS Global Shutter sensor “Better Dynamic Range, Higher Array of AtoD Converters, sensor board and extra memory at 16GB in case of the edgertronic SC2+.
Cosmetically not a lot has changed including the characteristic teal anodized blue aluminum; however there is a red ring in the front of the camera that is there to provide adequate flange distance to allow for infinity focus on the new sensor. The new sensor module changed the plane of focus by a small margin. The ring is there to correct and provide full non powered mount compatibility of Nikon lenses like on the original edgertronic camera.
INCLUDED ACCESSORIES:

Note: The videos above exhibit a phenomenon in the highlights called the black sun effect which is common in CMOS sensors by over saturating the signal in certain AD sectors. edgertronic will be releasing a software update to get rid of this imaging artifact in the near future.  This camera bug has appeared in Canon, Sony and Panasonic cameras in the fact and it is correctable by software.

As you can see from the video samples above the edgertronic SC2 is no slouch when it comes to quality and performance. We are now into Vision Research’s Phantom or Photron camera territory when it comes to frame rates.  This is of course at a bargain price compared.  You would have to pay anywhere from 5x to 10x the price of the edgertronic SC2+ to be able to acquire one of those cameras.
When you can record nearly 4,500fps at HD resolution the detail and time resolution of the subject increase to levels unimaginable to scientists just a couple of decades ago.  To have the ability to purchase a camera like this from 10k to 13k USD depending on the options is a milestone in high speed imaging history.
The original edgertronic now known as edgertronic SC1 available in color or monochrome for  $5,495 USD (8GB) version topped out when it comes to performance at 701fps 720p HD resolution, this new SC2 makes that frame rate look antiquated by comparison.  The 6.3x increase in frame rates now allow for analysis of many more physical phenomena in nature and or scientific experimentation. For industrial manufacturing users; the camera now can detect many more changes in the window of time allotted which can save valuable time and money in the engineering and troubleshooting of machinery.
The low price compared to other cameras also means that car crash tests and or other perilous situations can now be recorded more affordably than ever.   You could get 5 to 10 edgertronic  SC2 or SC2+ cameras  for the price of the competition and afford to loose a few in the name of science or art depending on your use.

The software platform for the edgertronic SC2 and SC2+ is the same as the original camera which means you will interface through a web browser like Google Chrome in a very intuitive interface. “See our edgertronic review for details about the software” 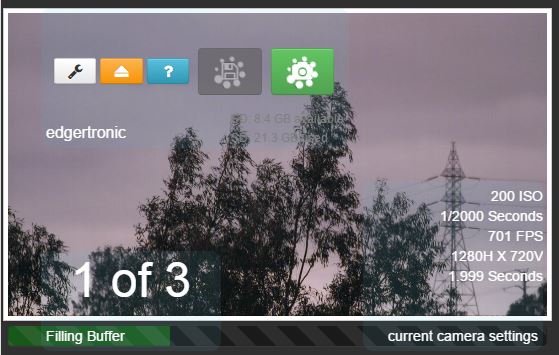 The camera will function over the network interface which now has a very small lag in the live view preview. Recording and settings are easily changed and familiar to any previous edgertronic user. 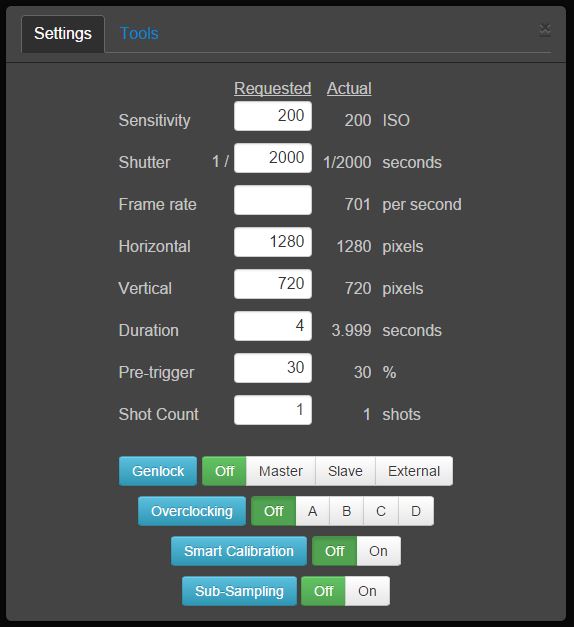 There will be new features added like user favorites or presets which will let you keep your most used settings in an easily accessible menu for recalling them on command. This will save time and will allow for consistency.  We will detail more of the features in a future post.
Software Version 2.2.0 Released Today also:
“Software Version 2.2.0 which adds several new features:

To update your camera, go to: http://wiki.edgertronic.com/index.php/Software_releases and follow the instructions carefully. As always, our software updates are FREE!”

“Video Overlay- New feature!
The edgertronic camera supports modifying the pixels in each video frame to overlay text and graphics. The video frames with the overlay applied are then encoded into a video file. There are different overlay features that can be individually enabled or disabled:

The edgertronic SC2 will consume slightly more power so the previous edgertronic SC1 power adapter will not be compatible with the new camera. The new sensor and electronics require a little more voltage to generate the performance necessary.   However as it is customary from edgertronic the kit will include the new power supply in the box.

12v portable power supply sources will still be supported and there will be no need to purchase a new portable battery pack like a Bescor for example.

A new option shared by Mike Matter the engineer and mind behind the edgertronic camera line is the Vagabond Mini™ Lithium (120VAC) Battery powered inverter by Paul C Buff.  With this relatively inexpensive pack, the edgertronic SC2 and SC2+ will be able to be used continuously for over 10 full hours on a single charge.   This is an excellent portable option for the camera and other gadgets you might need on the field.

edgertronic has done it again!

The first edgertronic camera changed the game by offering a true high speed camera taht delivered 701fps at HD resolution and up to 18,000 fps at reduced res for under $6k USD, unheard of at the time.  As of today it still graces the first spot on our high speed camera guide for price/performance in a slow motion capture device.

The edgertronic SC2 and SC2+ deal a near fatal blow to the price/performance scale with the HD 4,456fps at just 13k USD.  Other manufacturers should take note and be on their toes as the game has changed once again.  Powerful slow motion performance is now in the realm of small video producers, restricted scientific research and educators.

The edgertronic SC1, SC2 and SC2+ are available for purchase today and will ship in about 2 weeks from your order date.

HSC will receive an SC2+ color camera for review in the near future and we will be sure to put it through it’s paces and answer any questions that you might have regarding the capability and performance including other frame rates.

Thanks to Mike Matter of Sanstreak/edgertronic for providing the information and imagery for this post along with a review unit soon.

Visit edgertronic for pricing, ordering and full information on the SC1, SC2 and SC2+ cameras.     You can also order one here!