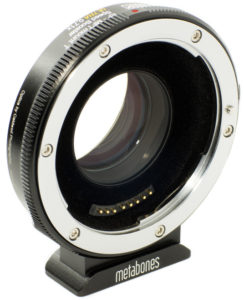 Slow motion shooters on Sony, Panasonic and other slow motion capable cameras are big fans of these adapters and speed boosters because it allows compatibility with their Canon EF glass collection. Furthermore the speed boosters enable wider field of view and an extra stop of light which is always needed when shooting high speed footage. → Continue Reading Full Post ←

This mount adapter converts Canon EF and EF-S lenses to a micro four thirds mount and permits electronic aperture, auto focus and image stabilization on lenses that support it. Cameras that use a MFT mount like the GH4 and Olympus OMD can now use Canon glass with all the features bundled with the lenses.

We are doing a full review of the Kipon MFT to EOS EF Autofocus Lens adapter that will be evolving over the coming weeks and months due to compatibility that may change and improve in the future. The following is a first impressions and v2.5 firmware performance that can you get out of it in it’s current state. → Continue Reading Full Post ←