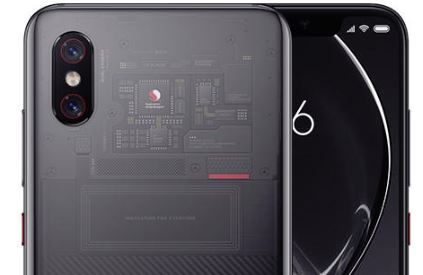 Xiaomi is soon releasing a new Firmware Update:  ROM – MIUI V10.1.2.0.PEHCNFI – based on Android 9 Pie and available first in China now.  The 2.1 GB update will include two new features that will make these phones more competitive. Search online for the ROM – MIUI V10.1.2.0.PEHCNFI  and be sure to follow the instructions while updating your phone.

The first feature is the inclusion of a 960fps slow-motion mode which is a big increase from the 240fps max setting before. As with other Xiaomi releases of the past, the slow motion samples are very hard to find or non-existent and there is a huge likelihood that they will use image interpolation from that same 240p to yield the 960fps. In a previous article, we referenced this test that showed the Xiaomi Mi Mix 3 using clear software interpolation to reach those frame rates.

We found the following sample which could be real but we cannot corroborate its authenticity. If it is from the Mi 8 then it clearly shows interpolation in software being applied.

The second feature is called: Super Night Scene which works by taking 8 different photos at very high speed and at different exposure values, then merges the result to create a better per pixel output that manages color and noise very well. This may be close to the Night mode on Google’s Pixel 3 Phone in how it does computational photography. Some were quick to call it a copy algorithm but we think this type of code needs quite a little bit of testing and time to do well. In our view, all phone vendors are using incremental camera computational algorithms to beat the hardware limitations in sophisticated software.

This comparison on Youtube shows the Xiaomi algorithm being close to what the Pixel 3 and Huawei Mate 20 X can achieve but really falling behind. 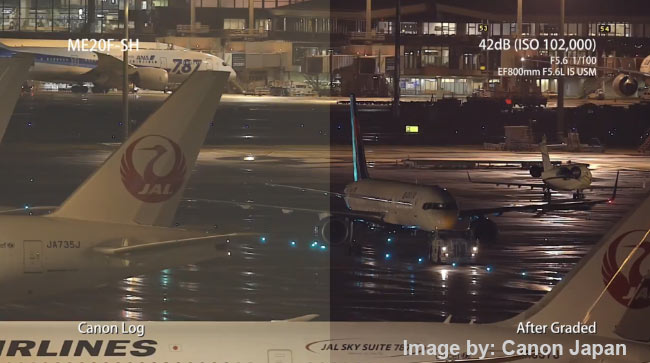 Canon Japan has released a sample video showing the Canon ME20F-SH Super High ISO full frame multipurpose camera in action.  It is impressive to see ISOs as high as  on a camera that is as portable as this. Even with a high price of $30k US it is something news gathering and documentary outfits like Nat Geo and Discovery will gravitate to in order to extract new levels of color and light information from extremely challenging low illumination environments.

Filmmakers will also find it useful for shooting in extreme low light for a specific take, but we feel that scientists and biologists in particular will benefit most from these advancements.  Underwater videography is probably the most peculiar use to study bio luminescent organisms in complete darkness like never before.

Canon Japan is Hosting the Movie and more info at this link for you to see: http://cweb.canon.jp/bctv/lineup/multipurpose/movie.html

While the highest ISO values are full of artifacts and noise it is to be specified that the shot above has absolutely no illumination source. The pixels are being illuminated by residual rays from far away land sources or starlight… no moon on this shot.    Any other camera would see a completely dark image with the exception of the A7s and a7s II Sony cameras and those will barely be able to show any shapes.    For those saying that the images are too noisy be aware that other ISOs are extremely clean compared to other cameras.

The Full frame sensor is only 1080p in resolution with pixels that are 19 microns in size. This is gargantuan by most modern sensor standards.  It is having a Full frame 35mm sensor with only 2.1 Megapixels.   With even further advancements of technology ahead it is not impossible to dream of even higher sensitivity in consumer cameras.

For slow motion the Canon ME20F-SH only offers up to 60p but it will be the best low light 60fps video you will see available outside of laboratory experiments.

There is more analysis of the footage here for you to read at the following sites:

Petapixel has it’s own analysis of the video here!

NoFilmSchool has their own take on the footage here!

The newly announced Canon ME20F-SH Camera besides it’s overly unpronounceable name and a price tag of $30,000 USD has what could be a record for any sensor to date. The ISO 4 million mark on this camera/sensor is able to record footage in full color at night. It over exposes footage only lit by a full moon.  The Sony A7s last year was a revelation of where sensor technology is going with it’s close to 1/2 million ISO at 409,600 . It could shoot in near complete darkness and could do a good job at it.  What Canon has done with the ME20F-SH is build their peak sensor technology into a 35mm Full Frame Sensor but with only 1080p Full HD resolution. The Sony A7s can shoot 4k footage with the HDMI output on an external recorder. This makes the pixel size on the Sony more constrained even with a Full Frame Sensor.

The pixel pitch size on the Sony A7s  (12MP on a full frame CMOS Sensor) is around 8.4 µm; in contrast the new Canon ME20F-SH has a  19 µm pixel size in a Full Frame Sensor.  This is an amazing performer in low light and probably the most sensitive sensor ever made for commercial purposes. At 2.26 Megapixels this is the state of the art for large pixels with impressive dynamic range and low light. It is unclear how the low resolution in such a large sensor will behave when it comes to moire and aliasing artifacts.

The Camera is a sensor block with an EF and EFS compatible Canon Autofocus mount with 3G-SDI outputs and HDMI for monitoring and recording.  The camera does have a MicoSD card for firmware updates but recording will take place on external recorders only with the added benefit of Canon LOG for maximum dynamic range retention.

Microphone port and remote control plugs are included, power is delivered by an XLR 4 pin type professional connector.  This camera is made for specialist shoots that have a lot of gear behind the scenes. WIth a camera that can record in full color in extreme low light the nature documentaries that relied on IR infrared cameras will no longer look green or blue with strange bright eyes. The new nature documentaries at night will have full color characteristics.

For scientific purposes it will be able to capture low light phenomena such as meteorites, biology at night and even microscopic specimens at extreme low light levels with clarity. The maximum Frame rate of 60fps at 1080p leaves us wanting much more with such low light performance.  You could shoot extreme frame rates in limited light environments only possible before in dreams.   Reducing the amount of light needed would produce a whole new realm of night time high speed video that is altered by adding light. Shooting wildlife at night at high speed in their native illumination could provide a wealth of information.

See the video below released two years ago using a prototype of the same technology by Canon. You can even see the milky way and other features of the night sky that were only possible with long exposures before. This kind of performance could revolutionize astrophotography.

“The Canon ME20F-SH is expected to be available in December 2015 at a suggested retail price of $30,000.” While the price is certainly nothing but expensive for the common producer of footage, it is a small price for scientific applications and large production houses and TV channels like Discovery Networks or the BBC.  This type of technology will allow for unprecedented ways of looking at the world.  The most important aspect of this extreme sensitivity in sensors is that when things improve, even higher ISOs will be available at higher frame rates and in much less expensive camera bodies.   The age of grainy footage at night is dissolving in front of our eyes but it may take a few years for it to be feasable in our budgets.  For everyone else the Sony A7s with a 4th of the performance is available to everyone in a portable body able to record to SDXC cards. And there are rumors of even better performance in an A7s Mark II. For $2,400 USD there is no better low light alternative.