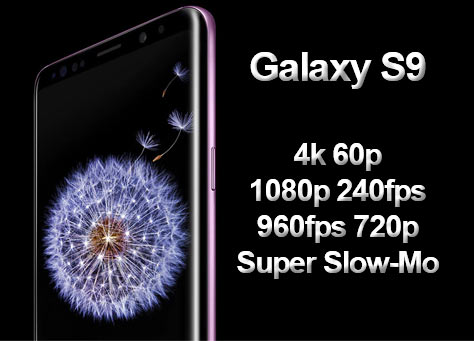 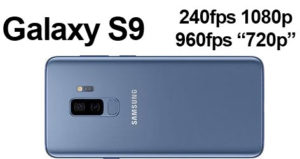 Camera companies are too loose to call video formats HD and Full HD when they are really just upscaling lower resolution video up to save in an overly compressed format.  The inclusion of now 1080p 240fps has to be the better spec here as the 960fps mode tops out at 0.2 seconds for a 6-second playback at 30fps.  Hardly ideal and much like what we saw in the Sony Xperia XZ phones of 2017.

*Super Slow-mo only supports HD resolution. Limited to 20 shots per video with approximately 0.2 seconds of recording and 6 seconds of playback for each shot.

The Galaxy S9 has a plethora of improvements from increased processing of the Octa-core Exynos or Snapdragon 845 depending on your geolocation to a real aperture diaphragm on the lens for f1.5 wide aperture to a smaller f2.4 for more depth of field, a first for a camera phone lens.

We are focusing on the video side of the equation as always and will leave the phone specs for others to wade thru. so how good is the new slow-motion mode?

Samsung has made huge strides to cater to high frame rate enthusiasts with the Galaxy S9 and it figures the usability aspect of the slow-motion capture mode should be easy to use and allow for a large percentage of keepers. What they have come up with is a dedicated super slow-mo mode that uses wither a button screen press or a motion tracking area to detect extreme motion changes in the frame to record the 0.2-second frame burst and conform it to 6.4 seconds played back at 30fps @ 720p.